Growing up on Long Island, New York, Melanie Delach (MFA ’19) thought she already was where she needed to be as an artist.

“Artists just put it in your head that New York is the center of the universe,” she said.

But professors at Adelphi University, where Delach completed her BFA, encouraged her to branch out and leave New York for some time. Artist and PAFA graduate Robyn Cooper (MFA ’12) told Delach about her positive experience leaving home and living in Philadelphia.

She was just one of the many voices telling Delach to leave the nest.

“I had my professors telling me that Philly is such a great place for emerging artists, and the city really wants people who are young,” she said. “They talked about all of the opportunities that you’re not going to get right away in New York so why not try going somewhere else.”

After meeting MFA Faculty Chair Didier William at a National Portfolio Day event, Delach started to warm up to the idea of leaving home.

“He saw the possibilities of where I could push my work. He even challenged me one-on-one the first time I met him and I knew I wanted to work with someone like him,” she said. “He saw potential in what I was doing and believed in where I wanted to bring my paintings.”

Now about to enter the second year in PAFA’s MFA program, Delach is glad she made a location change. She’s co-organizing PAFA’s Visiting Artist Program and assisting with the Low-Residency MFA Program.

The two-and-a-half year program is ideal for students who desire the community, support, and rigor of a traditional MFA, but with a more flexible structure to fit their lives and schedules.

“We do like to bring in local artists and people who have been affiliated with PAFA. We are really trying to create a diverse list of people; we want to bring in more women and people of color,” she said. “People who are a little bit outside the box and not super traditional, but at the same time, we want to hit all of the notes.”

This year, the VAP will feature Hein Koh. Delach describes Koh as a feminist sculptor and a role model for young women artists.

"She speaks a lot about family in her work, and how she's married and has a family and she has two kids and she still did it,” she said. There's this big taboo that women can’t get married and have an art career at the same and have a family. She’s a powerhouse for women artists."

As part of the Low-Res MFA program, Delach is helping students build community and is serving as a critic. It’s giving her a glimpse into teaching, which she hopes to do more of after graduation.

“We are here to help them navigate the MFA program because Low-Res is an intensive short period of time over three years, it’s a lot of community building,” she said. “We get to oversee what they’re doing and learn from them at the same time, and be their mentor which is really sweet.”

Learning from other students has been one of the most important components of Delach’s time at PAFA. Even though she considers herself a painter, she looks to artists who work in other mediums for advice and input.

“I didn’t want to go somewhere that made you have a defined major, and it would be painting only and you can only be with the painters. I find that I learn more from people who aren’t painters,” Delach said. “It’s really nice to have people who work in other mediums take a look at your work with a fresh eye and they can give you a suggestion for something to try.”

Now that she successfully tried getting out of her comfort zone and the state boundary of New York, Delach sees herself staying in Philadelphia for the time being.

“I feel like here I see so many people who have just graduated and are already getting jobs and showing their work all the time and people are buying their work and putting it in collections. It’s hopeful to stay here.”

Melanie Delach, "Is That My Hair" 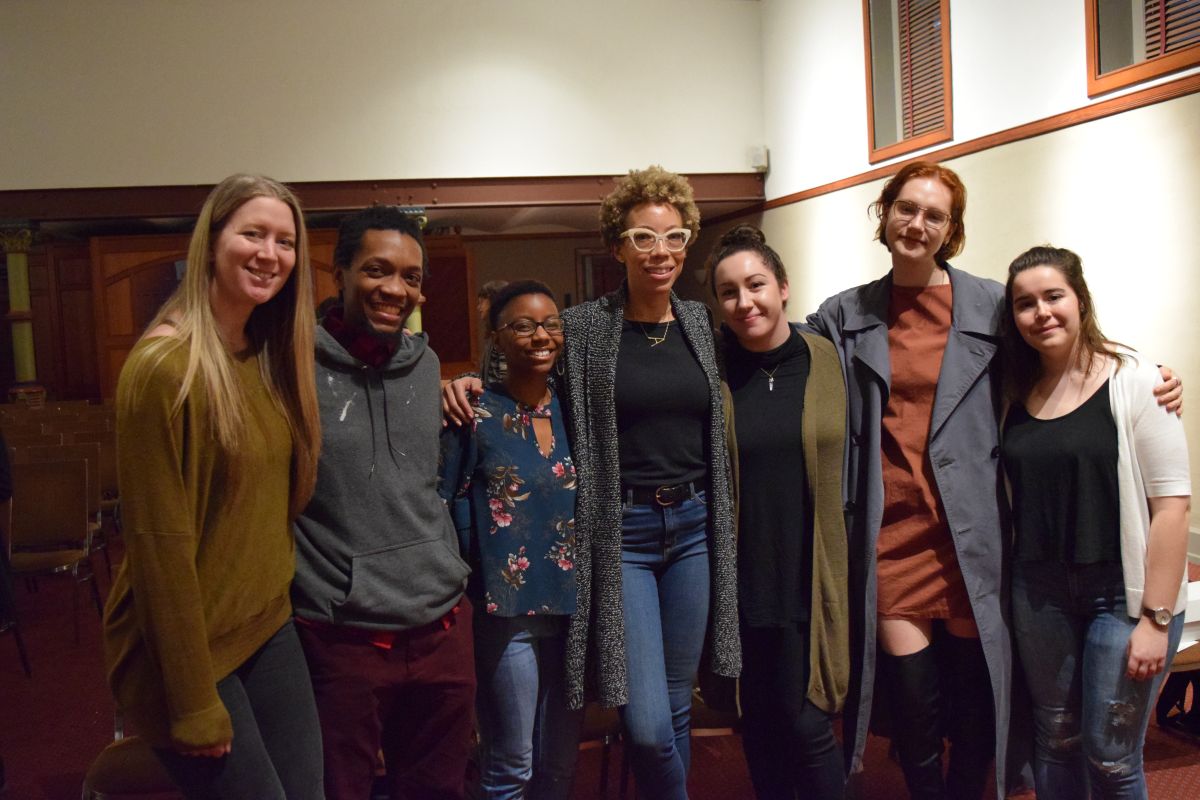