“Promote the cultivation of the Fine Arts, in the United States of America, by [...] exciting the efforts of artists, gradually to unfold, enlighten, and invigorate the talents of our Countrymen.”—Academy Charter (December 26, 1805)

The Pennsylvania Academy of the Fine Arts (PAFA) was founded in 1805 by painter and scientist Charles Willson Peale, sculptor William Rush, and other artists and business leaders.

Since its founding, PAFA has collected works by leading American artists, as well as works by distinguished alumni and faculty of its school. From 1811 to 1969, PAFA also organized annual art exhibitions from which significant acquisitions were made. Harrison S. Morris, Managing Director from 1892 to 1905, collected contemporary American art for the institution. Among the many masterpieces acquired during his tenure were works by Cecilia Beaux, William Merritt Chase, Frank Duvenek, Thomas Eakins, Winslow Homer, Childe Hassam, and Edmund Tarbell. Work by "The Eight," which included former PAFA students Robert Henri and John Sloan, is well represented in the collection, and provides a transition between 19th- and 20th- century art movements.

The current museum building, known as the Historic Landmark Building, opened in 1876. Designed by the American architects Frank Furness and George W. Hewitt,  it was designated a National Historic Landmark in May 1975. As such, it is recognized as an important part of America's and Philadelphia's architectural heritage. The collection is installed in a chronological and thematic format, exploring the history of American art from the 1760s to the present.

Explore our history, beginning with PAFA's founding on December 26, 1805, through an interactive timeline provided by the Dorothy and Kenneth Woodcock Archives. 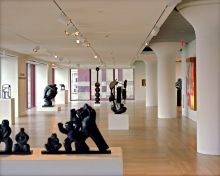 Learn more about the present and past of the buildings utilized by PAFA. 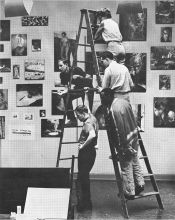 The Archives provides additional historical resources on past exhibitions, awards, and more.