Artist and community activist Sarah McEneaney (Cert. ’79) was born in Munich, Germany, and grew up in Larchmont, New York. Influenced by painters Alice Neel, Florine Stettheimer and Frida Kahlo, McEneaney is known for her intimate, imaginative and narrative work.

A focus on painting and studio work brought McEneaney to PAFA in 1975. She counts Martie Zelt, Jimmy Lueders, Elizabeth Osborne and Sidney Goodman as some of the PAFA faculty who had a great impact on her artistic development.

“Since my days at PAFA, my work has been personal and autobiographical. I am telling the story of the life of one person, but these stories are universal. As I became involved in community work, that activism has found its way into the painting as well.”

McEneaney’s community work includes forming the Callowhill Neighborhood Association in Philadelphia with neighbors in 2001, and co-founding the Reading Viaduct Project in 2003. The goal of the project is to preserve and renovate the Reading Viaduct, a stretch of abandoned railway that carried trains into Philadelphia’s Reading Terminal for almost 100 years, in order to create the neighborhood’s first park.

Since graduating she has received many grants including three Pew Fellowship in the Arts grants, three Yaddo fellowships, a Joan Mitchell Foundation grant, and an Academy of Arts and Letters Purchase Prize. McEneaney has exhibited her work throughout the U.S. and internationally, including the Institute of Contemporary Art, Philadelphia; the Mills College Art Museum in Oakland, California; and in PAFA’s exhibit The Female Gaze: Women Artists Making Their World. Her work has also been commissioned by the City of Philadelphia. 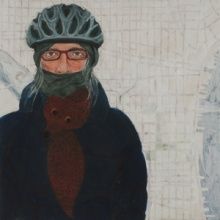 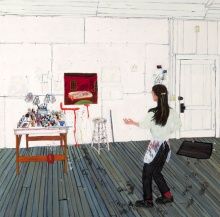