Preparing Illustrators for a Career

The art of illustration is woven into the DNA of the Pennsylvania Academy of the Fine Arts. The Illustration program was officially introduced at PAFA in the fall of 2015 but there is a long-standing tradition of illustration at the academy.

Fine Arts Dean Clint Jukkala sat down with Jessica Abel, the Chair of PAFA’s Illustration Program, and Frank Genuardi (pictured below), an illustration student, to talk about Fine Arts training, illustrating in a digital age, and preparing for life after graduation.

Below is a condensed version of their conversation; it’s been edited for flow and clarity.

On the history of Illustration at PAFA

Clint Jukkala (CK): There’s a long history of narrative storytelling here and you have a lot of students that studied here in the late 19th early 20th century like John Sloan, Violet Oakley, and Maxfield Parrish so its been part of the culture even when we haven’t had a designated illustration program. I was looking at a catalog from the early 1950’s and it said that “illustrators were first trained as artists and then they were taught to be professional illustrators.” In some ways it sounds like what we do now, that students are taught first to be artists.

Frank Genuardi (FG): At this point it doesn’t really matter if you’re coming in as an illustration or sculpture major, just the fact that you can come in here and have free reign of such a complete collection of works, like historic works from a museum perspective that the Cast Hall you have access to. Coming into your first year, it doesn’t matter if you ever do another cast drawing again, you’re going to want to spend all your time in the Cast Hall because it’s not something most people get to do. It’s so uncommon to be able to say I need to get a better sense of impression paintings, let me go down and see them, as opposed to looking them up in the library or look it up on your phone.

CK: We’re one of the only museum schools in the country and right on the illustration floor, we have a works on paper archive and study room, and an amazing museum across the street with an amazing collection and Cast Hall.

The importance of the Foundation Year

Jessica Abel (JA): I think one of the key advantages of PAFA as an illustration program is that we don’t silo students off. We don’t separate students into different departments and say, “Well you just get illustration training and you get fine art training.” You get the same underpinning that anybody who goes into the fine arts department gets. Those things are super necessary for illustrators. Especially things like anatomy and perspective, you need those things even if you end up working in a very simple style as an illustrator. I know so many people in comics and illustrations that struggle with that on their own because they didn’t get the training in art school.

FG: If you can’t paint and you can’t draw then you can’t do illustrations, you just can’t.

On incorporating digital design into the Illustration Program

JA: Stephanie Reyer, our digital design teacher is amazing. Her brief was to cram a full graphic design education into one semester for artists who are not graphic designers and she did a great job.

FG: Adobe Illustrator is one of the most notoriously difficult programs to learn. Stephanie broke it down into simple ways and it’s the best way I’ve ever heard anybody teach Illustrator, and we all picked it up in no time.

My favorite assignment in the Graphic Design class was that we had to do a book cover. It wasn’t just the front cover, we had to design the inner flap the front cover, the title, the spine the back cover, and the back flap. We all made illustrations to go with our covers. That right there added this whole other level of creativity that you don’t normally get in a basic graphic design class. We were highly encouraged to not just use a computer.

And preparing students for careers as professional artists

FG: All of the illustration classes pull a double duty with what you’re supposed to learn, and then what you create is serving a website that you’re going to have. At this point in time I don’t know what kind of professional artist I will be a year from now or day one after graduating. But I do know day one after graduating when I’m sitting around thinking, "What am I going to do with my life,” I might as well update my website and add designs and sell a couple of shirts because its already going to be in place.

JA: My teaching philosophy is project-based learning so everything is about creating conditions for students to figure out how to solve problems.

You have to find the pieces and put them together, and be an independent professional person. There’s going to be so many things you don’t know how to do and have to figure out how to do it. 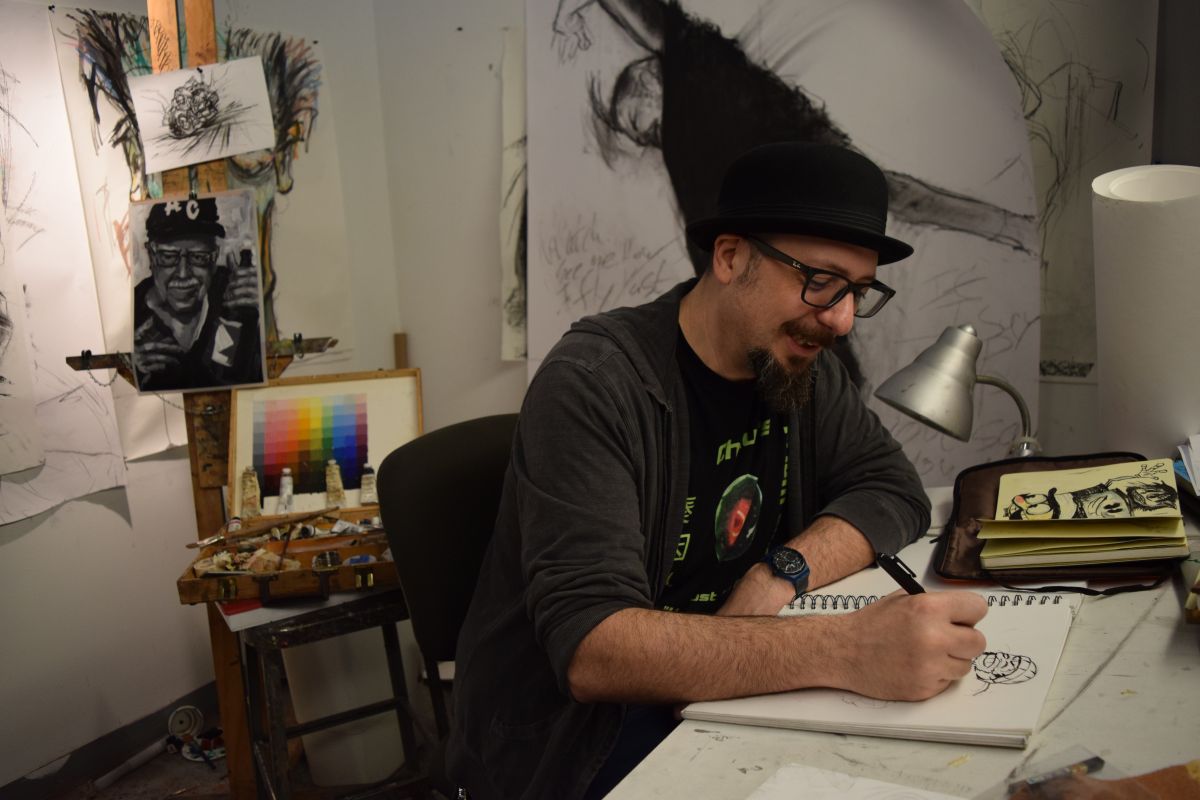 Frank Genuardi in the studio. 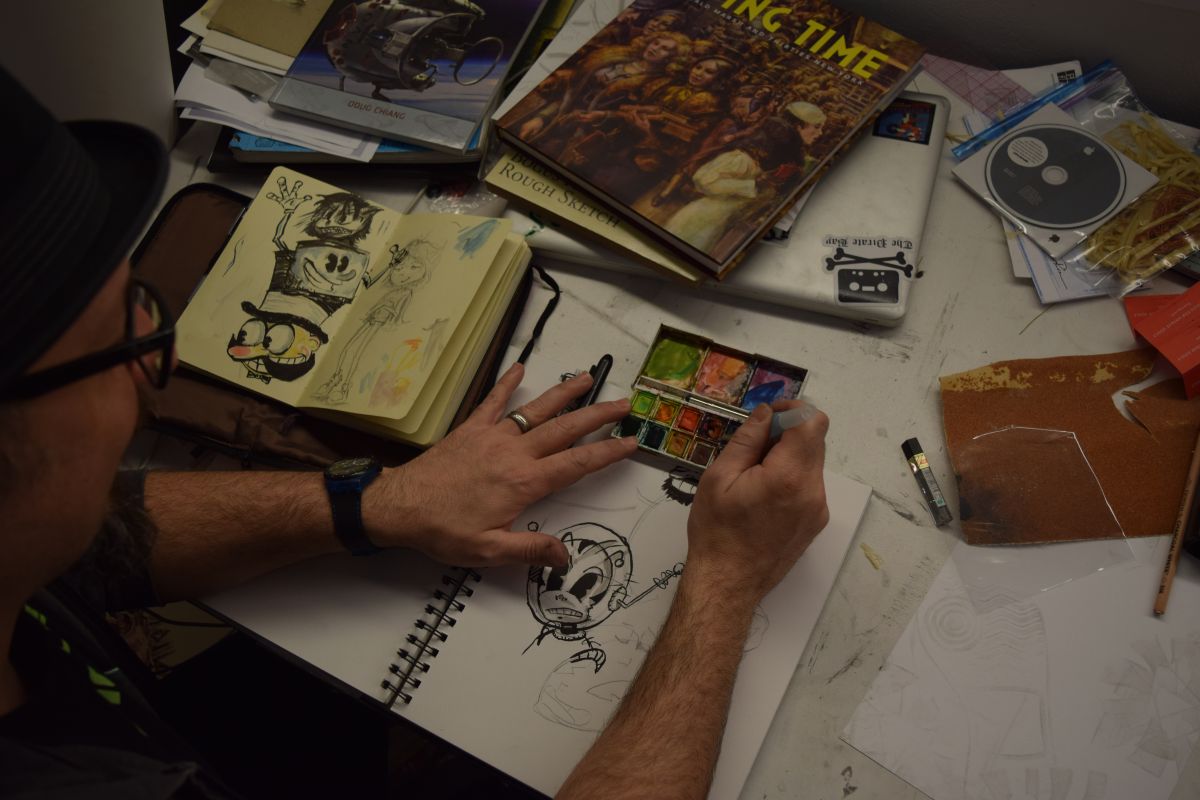