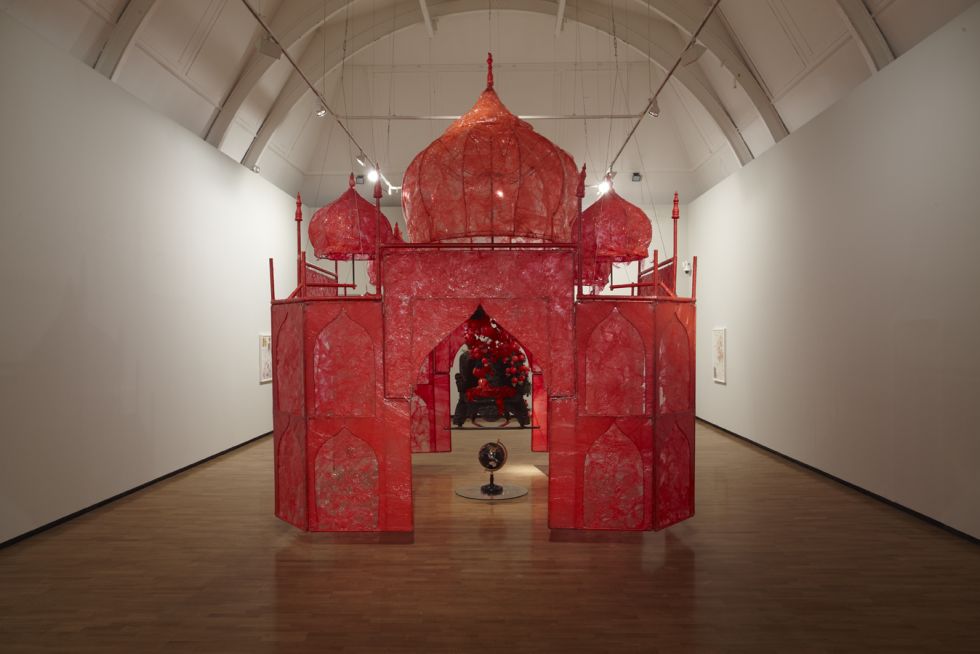 PHILADELPHIA (August 27, 2018) -- The Pennsylvania Academy of the Fine Arts (PAFA) is pleased to present its major fall exhibition, Rina Banerjee: Make Me a Summary of the World, the first mid-career retrospective on the contemporary practice of Rina Banerjee, co-organized with the San José Museum of Art, California (SJMA).

Known for her large-scale sculptures and installations made from materials sourced throughout the world, Banerjee’s works investigate the splintered experiences of identity, tradition, and culture, prevalent in diasporic communities.

Make Me a Summary of the World will be on view to the public from October 27, 2018, through March 31, 2019, in the galleries at PAFA. It will be accompanied by extensive programming and a full-color, 160-page catalog co-published with PAFA and SJMA. The exhibition will then open at SJMA from May 18, 2019–October 6, 2019, before embarking on a national tour.

Banerjee (born 1963) is one of the most important artists of the post-colonial Indian diaspora living in the United States and her work has been shown most extensively in Europe and South Asia. This exhibition, the first in-depth examination of the artist’s work, will consider Banerjee in both American and global frameworks, specifically in relation to Banerjee’s intersectional approach to feminism.

Jodi Throckmorton, Curator of Contemporary Art at PAFA, remarked: “Make Me a Summary of the World marks a defining moment for Rina. As the artist’s first retrospective, it traces her work over twenty years, culminating in sculptures made for the 57th Venice Biennale and 2017 Prospect Triennial in New Orleans—important exhibitions that reflect one of the most exciting periods of recognition in Rina’s career.”

Bringing together several of Banerjee’s monumental installations in conversation with more than two dozen sculptures, as well as a thorough selection of works on paper, Make Me a Summary of the World will transform PAFA into an otherworldly and multi-sensory space.

Using a variety of gathered materials ranging from African tribal jewelry to colorful feathers, light bulbs, and Murano glass, Banerjee’s art celebrates diversity at every level. These sensuous assemblages present themselves simultaneously as familiar and unfamiliar, thriving on tensions between visual cultures and raising questions about exoticism, cultural appropriation, globalization, and feminism.  Her works are paired with thought-provoking and poetic titles that are works of art in themselves, ranging in length from 50 to 180 words.

“The upcoming exhibition on the work of Rina Banerjee is an ambitious project for PAFA and its museum,” said Brooke Davis Anderson, Edna S. Tuttleman Director of the Museum. “It’s also a necessary project for the first art museum in the country because Banerjee continually and aggressively examines what it means to be an American artist. Through the lens of gender, race, class, and from the point of view of being from somewhere else, Rina voices through color, form, texture, scale, and found objects conversations about democracy and equality.”

Susan Sayre Batton, Oshman Executive Director of the San José Museum of Art, said, “We are thrilled at SJMA to co-organize this monumental exhibition of world-renowned artist Rina Banerjee. Bringing her work to the people of Silicon Valley and the West Coast reiterates SJMA’s dedication to foster awareness of artists’ broad contributions to society. Banerjee’s art explores globalization, isolation, and identity—themes that reflect our community.”

Lauren Schell Dickens, the curator at the San José Museum of Art, added: “In her work, Rina disrupts conventional notions of identity, delving into the complex territory of cultural fragmentation and self-identification, which makes her an important voice today. We’re particularly excited to be presenting this rich examination of her work in San José, which is home to so many diasporic groups of varied cultural backgrounds.”

Born in Calcutta, India in 1963, Banerjee was raised in the United Kingdom and the United States. She received her Bachelor of Science degree in Polymer Engineering from Case Western in 1993 and took a job as a polymer research chemist upon graduation. After several years, she left the science profession to pursue her MFA in Fine Arts from Yale University. Banerjee currently divides her time between New York City and Philadelphia.

She has exhibited in New York, Paris, London, Tokyo, New Delhi, and notably in a solo exhibition at the Smithsonian in Washington, DC in 2013. Her works are also included in many private and public collections such as the Whitney Museum of American Art (NY), San Francisco Museum of Modern Art, Centre George Pompidou, Paris, France; Queens Museum (NY); and the Brooklyn Museum (NY). PAFA recently acquired two of Banerjee’s artworks for its permanent collection and they are included in the exhibition.

Rina Banerjee: Make Me a Summary of the World is co-organized by the Pennsylvania Academy of the Fine Arts, Philadelphia, and the San José Museum of Art, California.

Major support for this exhibition is made possible by the William Penn Foundation, the Andy Warhol Foundation for the Visual Arts, the Exelon Foundation and PECO, and the National Endowment for the Arts, Galerie Nathalie Obadia, Paris/Brussels, Ota Fine Arts, Shanghai/Singapore/Tokyo, Isabel Stainow Wilcox, Emily and Mike Cavanagh, The Coby Foundation, Connie and Jules Kay, Charles and Kathy Harper, and the Lenore G. Tawney Foundation, with additional support provided by the E. Rhodes and Leona B. Carpenter Foundation. Ralph Citino and Lawrence Taylor, and Jane and Casey Brandt and other donors.