Visual artist Njideka Akunyili Crosby returned to PAFA on November 9, 2018 as part of the Visiting Artist Program. Akunyili Crosby completed her Post-Baccalaureate Certificate at PAFA in 2006 after graduating from Swarthmore College.

She moved to the United States from Nigeria to study in Philadelphia. In 2017 Akunyili Crosby won the MacArthur Genius Grant.

Clint Jukkala, PAFA’s Fine Arts Dean, first became acquainted with Njideka Akunyili Crosby and her work at Yale, where she went on to study after PAFA and Jukkala was an Associate Professor and Director of Undergraduate Studies at the time.

“I vividly remember when I first encountered Njideka’s paintings. I was deeply struck by their strength and sophistication and her remarkable ability to intimately articulate the human form in a deeply personal space,” Jukkala said. “These were skills she began developing while she was a student at PAFA and they’re part of the foundation for the extraordinary and expansive work she’s making today.”

The Visiting Artists Program is a student-run venture that brings an outstanding roster of local, national and international artists to PAFA each semester. PAFA students not only attend lectures with the visiting artist but are also given the opportunity to have an in-studio critique with various artists throughout the semester.

The free program is open to the public and exposes participants to a range of artistic approaches, and fosters discussion about contemporary art and ideas.

Below is an excerpt of Akunyili Crosby’s lecture; it has been edited for flow and clarity.

Culture is messy, people always think of it as this stagnant thing that stays put and doesn’t mix but it’s not true. Contact has been happening for years longer than we think it has, between tribes, between countries, between Nigeria and the rest of the world. I love looking at the things we call tradition and really trying to trace back where they come from, really trying to show what we think of as traditions are a hybrid.

And then coming to my generation where I was born in a town in eastern Nigeria, I went to high school in Lagos, a big metropolitan city and after high school, I left to come to the United States. I live here now but I go home once or twice every year and consider myself someone of two homes.

Her Connection to Portrait Fabrics

The portrait fabric is something that really fascinates me. They are customized fabrics you make to commemorate various events, people do them for weddings, for birthdays, you see it a lot of elections or burials.

The print houses actually co-opted this tradition that wasn’t theirs, they didn’t have a claim on it and made it into their own. Nigerian and sometimes Ghanaian fabric print houses have taken the technology of precise wax-resistant printing of a simple repeat pattern and they’ve invented from it.

The reason why I feel a kinship to the portrait fabric and I use them in my works is that I do see a parallel with what I do in my practice.

I’ve studied at the Community College of Philadelphia, Swarthmore College, Pennsylvania Academy of the Fine Arts, and Yale. Those are the places I really studied painting, so the painting tradition I’ve inherited is very academic, western, figurative painting. How do I take this tradition I inherited and do something different with it? What is that little thing that cracks it open and gives me ownership to this thing that I got from living in and studying in the United States?

The Impact of Studying at PAFA

In my final year at PAFA I saw Vincent Deisderio do a painting demonstration where he shellacked a canvas and then did a painting on top of the shellacked canvas. It made this really nice amber glow so I thought it would be nice to find a way to do that to paper. So I started tinting my paper with a little bit of amber color to it and then I tried other colors.

Seeing a Familiar Figure in Her Work

When I style shoots with multiple people, I stage them. It’s just my husband and I staging them. I figure out my point of view and set up the camera on the tripod and I have a clicker. And because I have a tripod and it’s on a clicker, we run from place to place and I can put all of the images together because they’re all from the same point of view.

People who know my husband will sometimes look at a piece and say, “Yea, that's him, that's the way he sits.”

Looking Ahead to the Next Generation

I do have a son; he’s almost 2 years old. What is the space he occupies, it’s going to be even more fractured than mine. He’s going to be an American in a way that I’m not, a naturalized American, some people say I’m not really American but he’s American in a way nobody can deny. He was born here. If I have my way he will be spending half his year in Nigeria and I’m teaching him my language, so he’s going to have an even more complicated space.

It’s one of the things I’m curious about but it probably won’t come into my work for a while because I cannot figure out his narrative for him. It’s not my lived experience so I am looking forward to when we can have those conversations to really see what that space will be. 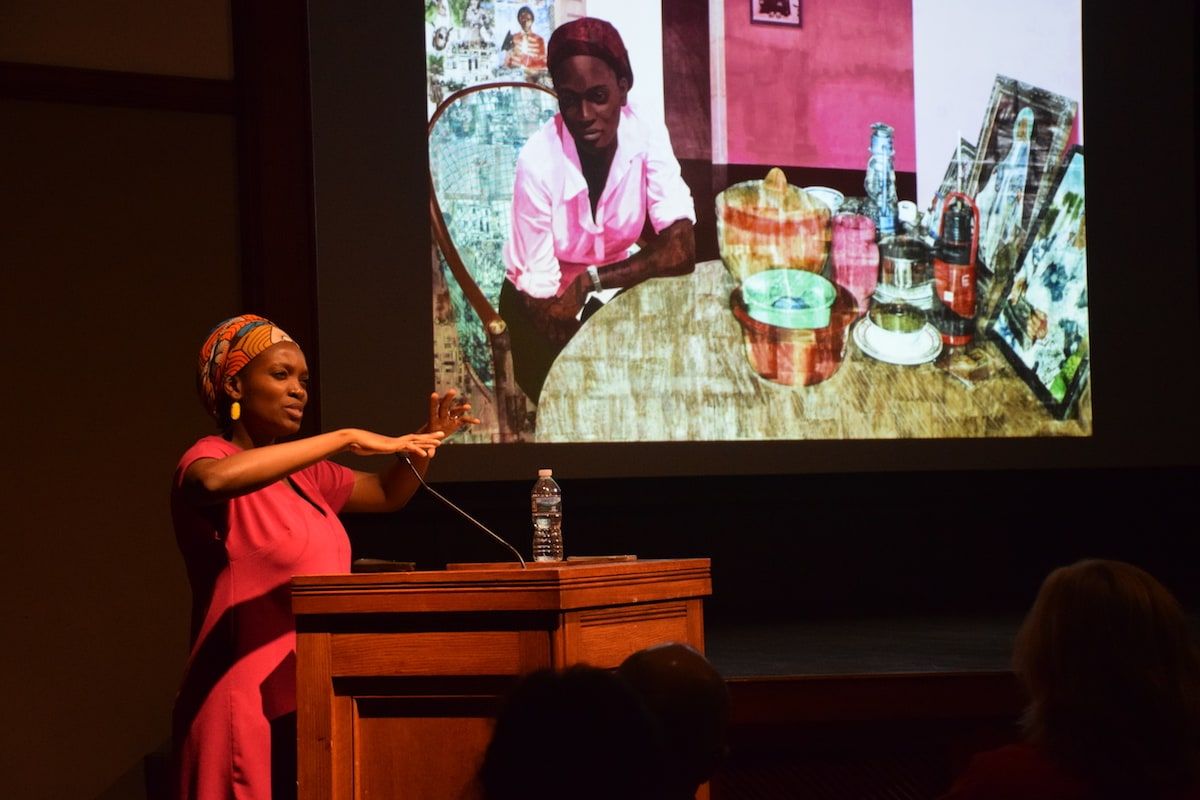 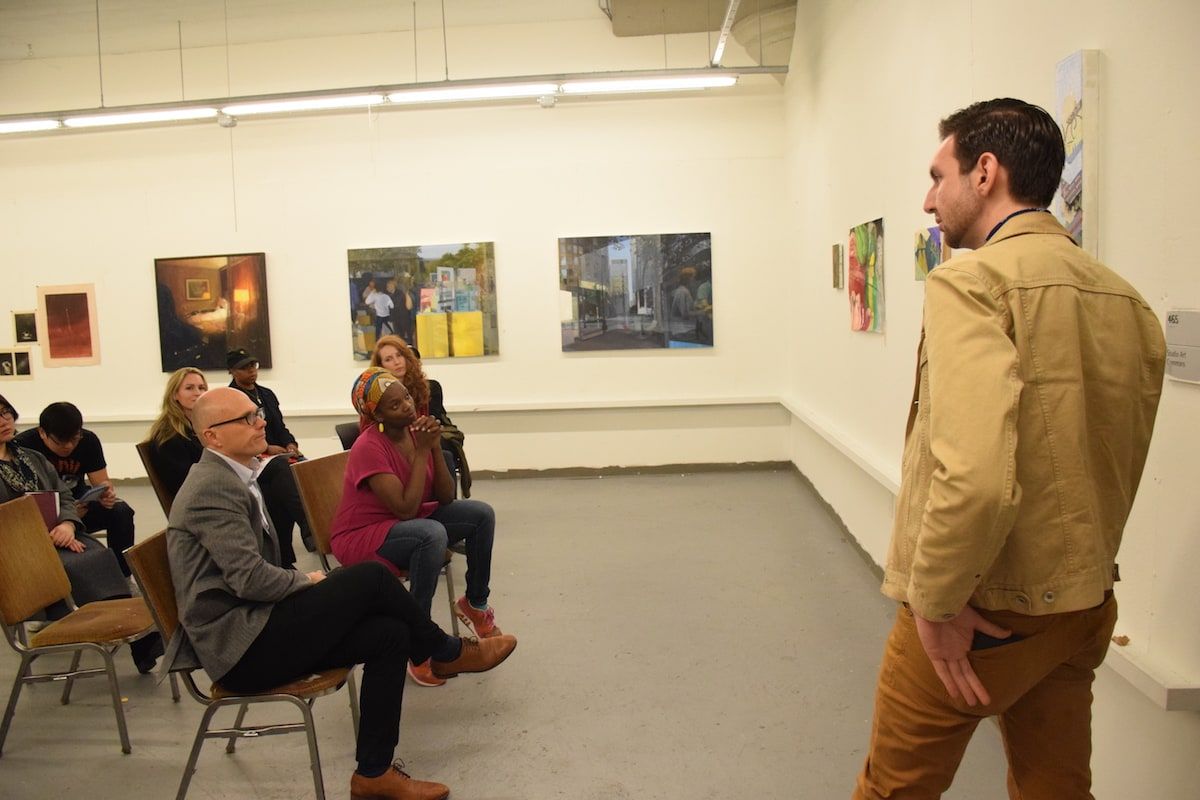 Njideka Akunyili Crosby discusses work with a student in a critique. 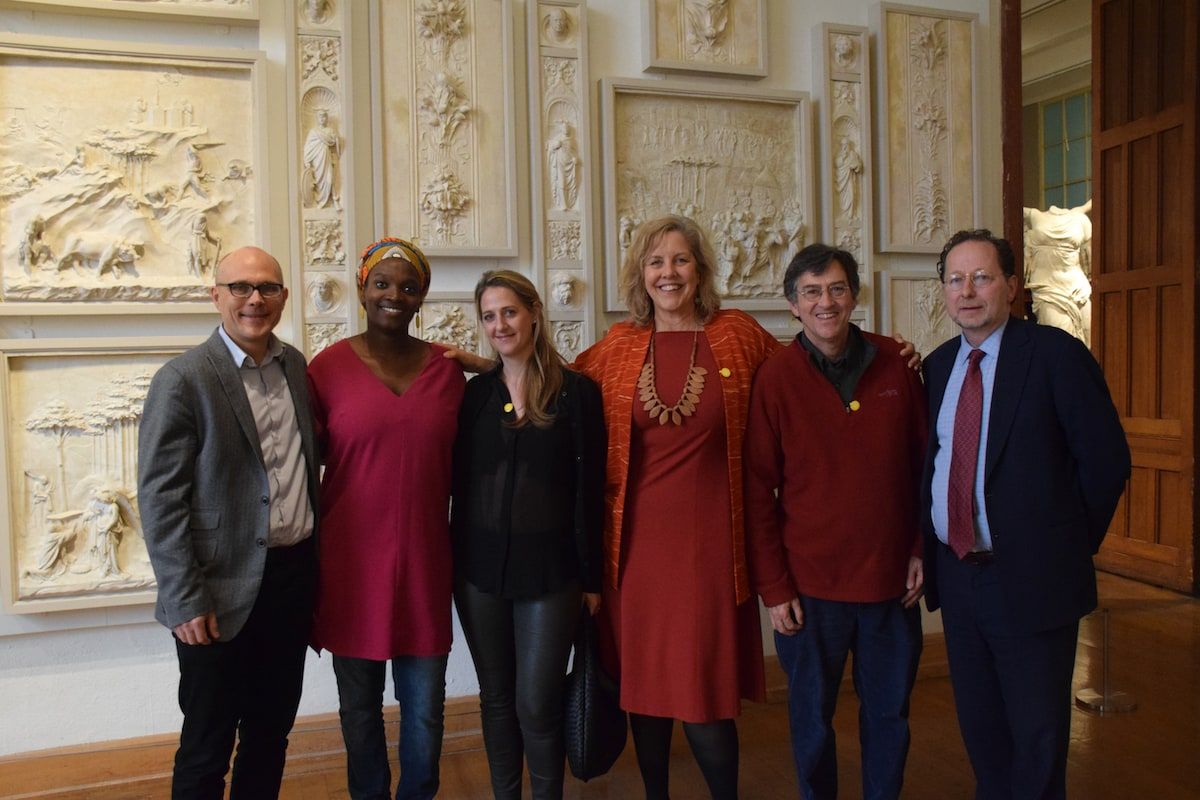