History Influences a New Work in the Permanent Collection

The last photographs taken of Walt Whitman before his death, along with death casts of his head, hands, and chest were created by PAFA artists Samuel Murray and Thomas Eakins.

So when artist Mark Stockton began researching Whitman for projects related to Whitman at 200, the citywide celebration of America’s “poet of democracy", Stockton figured the death casts would be in PAFA’s archives.

“I went to PAFA asking contemporary curator Jodi Throckmorton if they had the castings and PAFA doesn't,” he said. “I wanted to use the death castings for something. The chest and hands are at Harvard and the model of the head is at Princeton.”

Stockton traveled to Harvard and Princeton to make 3D scans of the castings for a project. For a Whitman at 200 exhibition at Rutgers-Camden, Stockton and collaborator Lewis Colburn created a replica of the rocking chair Whitman had been photographed in and using the death cast scans carved Whitman’s hands into the chair.

“The largest strain in my work deals with individuals within American iconic structure,” he said. “In a way, its contemporary portraiture but my portraits often deal with information indexes.”

Even though the death casts ultimately weren’t held at PAFA, Stockton still wanted to include the Academy in his Whitman research and artwork.

There are several Walt Whitman-related artworks in PAFA’s collection, including a bust by Samuel Murray, an oil painting by Thomas Eakins, and a woodcut by longtime PAFA professor Dan Miller. In celebration of Whitman’s 200th birthday, Throckmorton thought there was room for one more Whitman work in the permanent collection and commissioned Stockton to create a drawing of the poet.

“Mark is an incredible draftsperson. I've been wowed by all the drawings he's done, whether they be political portraits or things related to pop culture,” Throckmorton said. “And I've always wanted something by him for the collection. This made sense to do because he looks at a lot of historic works and he was looking at something with Whitman and Eakins.”

For The Poet in His Bedroom or Walt Whitman in repose amongst a chaos of papers in Camden in 1891 Stockton worked from photographs of Whitman, of which there are 128.

“Whitman was always interested in his own image and lore,” Stockton said. “There are more than 100 photographs of him, which is almost unheard of for a person of that time.”

He focused on two photographs taken by Dr. William Reeder, a photography novice and fan of Whitman’s. The photos, taken towards the end of Whitman’s life, depict him surrounded by papers.

“You can really see how much of an accumulator or hoarder he was. It got me thinking about what ends up happening with a person and all of the creative detritus they surround themselves with,” he said. “The image is part heroic and part pathos. He was buried in his own cultural production.”

For six months, Stockton worked on the graphite drawing. He spent an hour each morning drawing Whitman and likened the practice to a daily exercise routine.

The pay off of his efforts is now on view in PAFA’s Historic Landmark Building.

The Poet in His Bedroom… is being exhibited as part of Multitudes: Walt Whitman at 200 a show produced by PAFA’s Youth Council. The Youth Council is a free after-school program that offers interested teens a chance to create a prominent place for young audiences in the daily life of the museum. The Youth Council organizes poetry nights, poster-making events for their peers, and curates an annual exhibition.

Stockton says seeing Whitman interpreted by the next generation is a testament to his legacy and impact on American culture.

“It speaks volumes about how much he’s widely adopted across mediums whether its poetry or writing or early icons of gay figures. It’s really amazing to me about how he had social gifts in his writing and represented a populist idea of democracy in his being and in words. He took this charge to be America’s poet laureate for everybody.” 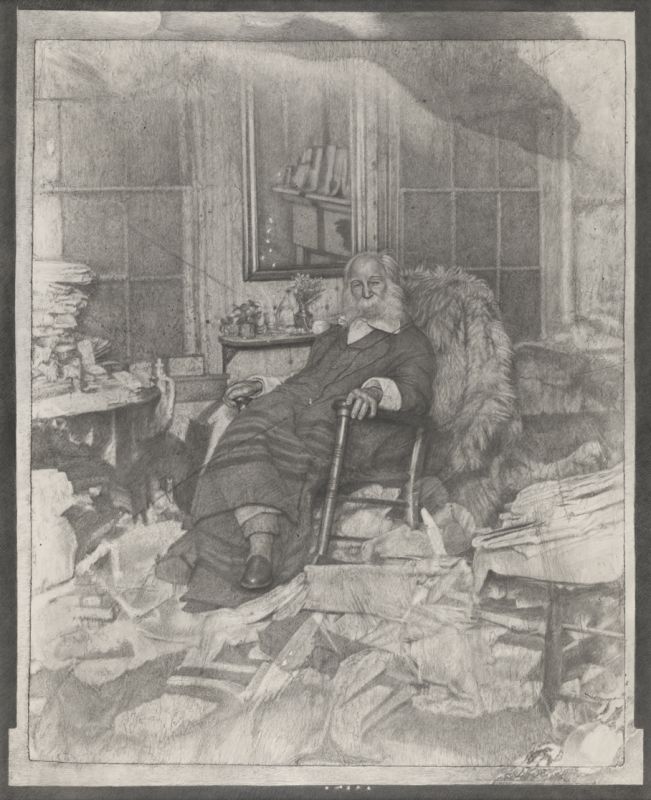 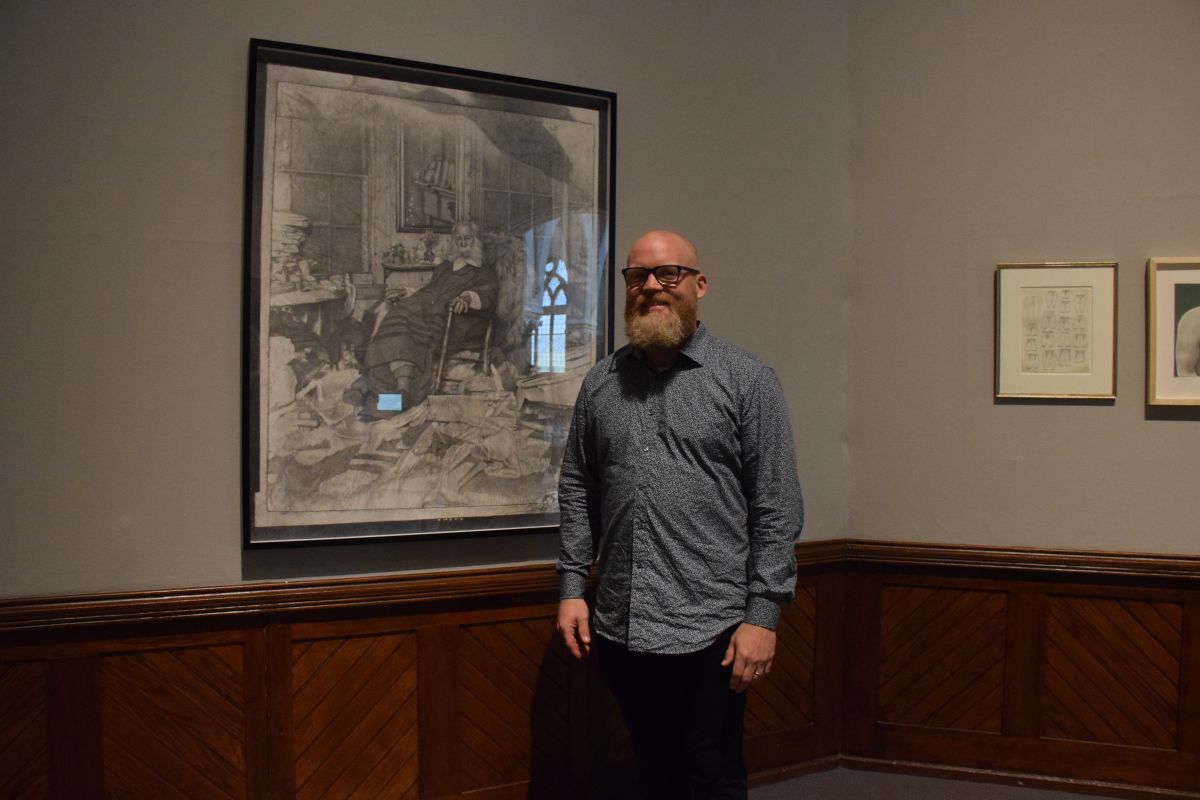 Artist Mark Stockton stands in front of his work, "The Poet in His Bedroom..." at the opening reception for the Youth Council's exhibition, "Multitudes: Whitman at 200."