Aaron Fowler (BFA ‘11) first came to art-making after the tragic death of his 6-year-old cousin Derion. In seventh grade at the time, Fowler decided to draw a portrait of his cousin in an art class. “After drawing him I felt a whole lot better about the situation, as if I had gone to therapy,” says Fowler. He also was struck by how the painting resonated emotionally with his teacher. “I didn’t tell him what happened prior to turning the drawing in, but he felt it. At that moment I realized the power of art and how it can communicate to others and what it can do for me.”

A native of St. Louis, Missouri, Fowler’s work is inspired by the injustices and violence that plague the poorest populations. Initially only considering schools in the Midwest, he became interested in PAFA after discovering that painter Kehinde Wiley was lecturing at the school and seeing the work of faculty members and alumni such as Alex Kanevsky. “I remember looking at Alex Kanevsky’s process paintings, which really drew me to PAFA.”

He won several prizes while at PAFA, including the Schiedt Travel Scholarship and the Angelo Pinto Memorial Prize for Experimental Work. In 2015, he was the recipient of a prestigious Hort-Mann Foundation grant.

Fowler has also experimented with performance art and had a two-man show with friend and fellow PAFA alumnus Michael Shultis.

“PAFA gave me a greater understanding of art, what it means to me, as well as a set of tools to communicate that,” he says. 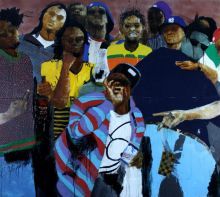 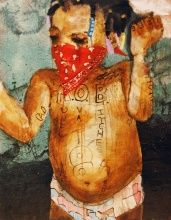 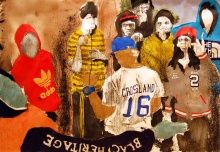