Exhibition Info
Historic Landmark Building
Curated by
Robert Cozzolino, Curator of Modern Art
In celebration of the debut of the Barnes Foundation in its new home, this exhibition explored the connections between PAFA and Dr. Albert Barnes

In celebration of the debut of the Barnes Foundation in its new home on the Benjamin Franklin Parkway, the Pennsylvania Academy of the Fine Arts (PAFA) welcomed its new neighbor by exploring the connections between PAFA and Dr. Albert Barnes. The exhibition featured works from the permanent collection that relate to Barnes’s tastes and philosophy, as well as works by his friends, and items from the PAFA Archives.

It was at PAFA in April 1923 that Barnes first revealed the richness of his modern European art collection to the American public. Among the factors that led Barnes to allow 75 paintings and sculptures from his collection to be shown at PAFA was the presence of progressive faculty members such as Arthur B. Carles. After viewing an avant-garde PAFA exhibition showing “Later Tendencies in Art" in 1921, Barnes wrote to Carles congratulating “the liberal spirit of the officials of the Academy in opening their doors to what is the most real and vital movement to many, many people interested in art…your present show is the first real move to shake Philadelphia out of the lethargy which has been the reproach to us from artists and collectors of other cities…It’s a mighty fine thing for Philadelphia to have genuine artists of ability have the opportunity to express themselves freely and without dictation from self-constituted authorities or conventional dogma and have those expressions viewed by the public for what they are worth. It is a positive step towards education and enlightenment in the proper meanings of those words.”

Two years later, he would revise his opinion about Philadelphia in the wake of criticism of his collection. This installation included material related to the 1923 exhibition and presented works showing links between PAFA and Barnes. 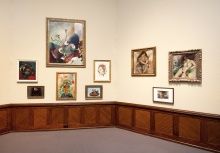 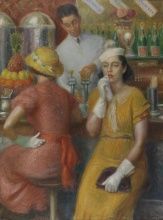