The Pennsylvania Academy of the Fine Arts (PAFA) is pleased to present Jennifer Bartlett: History of the Universe —Works 1970-2011 organized by the Parrish Art Museum. Jennifer Bartlett emerged in the 1970s as one of the leading American artists of her time and one of the first female painters of her generation to be both commercially successful and critically acclaimed.

Remaining true to her vision of painting as a never­ending associative construction that always leaves open connections to other ideas, Bartlett continues to experiment, always willing to subvert and unsettle the seeming happiness and simplicity of her imagery and words.

The exhibition provided an unprecedented 40-­year survey of Bartlett’s career, featuring both highly controlled abstract works and those reflecting a more painterly realism. Included were prime examples of works from all of Bartlett's major series, including the multi­paneled and multi­medium “House Paintings” and the critically acclaimed “In the Garden” series; the innovative pairing of sculpture and paintings depicting boats and houses; the “Air: 24 Hours” series painted between 1991 and 1992; the autobiographical “Earth Paintings,” which dealt which memories of child abuse and were painted between 1993 and 1995; her “Word Paintings,” begun in 2004, featuring short stories and dialogues “written” onto her signature enameled steel plates; and her most recent paintings depicting houses, trees, and plants surrounding her homes in Amagansett and Brooklyn. 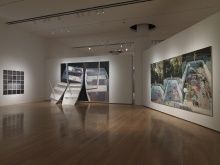