From 2011 until April 2016, the Pennsylvania Academy of the Fine Arts (PAFA) was a home away from home for one of George Tooker’s most startling and fascinating paintings. Highway (1953) is a major work of “social concern” that Tooker made as part of a series of paintings responding to the challenges of living in New York, critiquing modern urban experience through a menacing (and even witty) treatment of subject matter and a composition that reinforces the anxious, confusing, and dangerous aspects of city living.

This loan helped the Terra Foundation foster a growing and diverse audience for American art through a collaboration that promised a wide audience for works of art that do not otherwise have a public presence. The Terra Foundation’s collection, among the most extraordinary privately formed collections of American art, is nomadic since it no longer operates a museum building in its home base of Chicago. This was the first long-term loan placed in Philadelphia.

At PAFA Highway was in a fresh context. Because PAFA plans many gallery rotations each year, Highway’s relationship to other objects shifted gradually over time making its potential meanings expand through new juxtapositions (one example is pictured above). Highway broadened the context for existing works in PAFA’s collection by Surrealists and magic realists such as Gertrude Abercrombie, Jared French, Kurt Seligman, Honoré Sharrer, Yves Tanguy, Dorothea Tanning, John Wilde, and Andrew Wyeth. Because Tooker studied with Reginald Marsh and was close friends with other leading New York realists of the 1940s (including Edward Hopper), the juxtaposition of Tooker’s painting with their work in PAFA’s collection revealed exciting and unexpected correspondences. Initially Highway was on display in this context, anchoring Gallery 6 of the Historic Landmark Building. Afterwards, thematic installations were designed to include Highway, such as examinations about the modern city, abstraction vs. representation and others suggested by future acquisitions into the collection and tie-ins with PAFA curricula, special exhibitions, and area courses (at local colleges and universities). PAFA was excited about the possibilities this important loan opened up for its installations and programs. 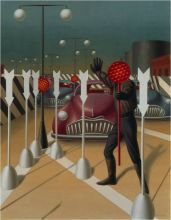