As part of its continuing Morris Gallery program (a series of solo exhibitions by emerging artists), the Pennsylvania Academy of the Fine Arts (PAFA) presented an exhibition by Kentucky-based Cynthia Norton. Influenced by the folk aesthetics and history of her surroundings, Norton’s work employs music, video, mixed media, and performance as her country-music alter ego Ninnie, in a manner that combines feminist thought with local and vernacular imagery inspired by the cultural traditions of the rural South and specifically of her native Kentucky. While often combining these different mediums, Norton uses the portrayal of the comedic country rube as a strategy to explore the peculiar relationships between folk traditions, readymade sculpture, storytelling, and technology. Her works often have a “homespun” quality—from self-made musical instruments, made from suitcases and tennis rackets, to gritty lyrics sung by an amateur voice—which points to her “affirmative belief in the power of womanly arts.” These makeshift elements combined with her quirky persona—complete with old-timey Southern costumes fit for a country music star—all attest to Norton’s creativity and inventiveness.

Norton’s project in PAFA’s Historic Landmark Building used paintings in the collection as sounding boards for a group of new video works and sculptures that reflect on the historic portrayal of women in art. Playing with the idea of mixing high and low art, the exhibition acknowledged the long history of PAFA and its fine art collection while juxtaposing it with references to the cultural and musical history of her Kentucky hometown. Much like her performances of altered famous country and blues songs, she is not trying to satirize these histories, but instead critically—and humorously—engage with these concepts. 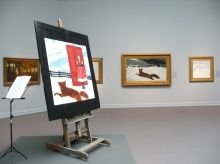 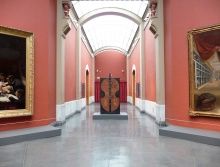