The process of designing and constructing the Pennsylvania Academy of the Fine Arts (PAFA) is evident in the drawings that Furness & Hewitt created to win the competition and build PAFA's National Historic Landmark. This exhibit presented the competitors' schemes as well as the Furness drawings for the first time.

In 2012 institutions across Philadelphia celebrated the architectural acheivements of the heroic life of Frank Furness (1839-1912)--a celebration known officially as Furness 2012. After service in the cavalry during the Civil War, for which he won the Medal of Honor, Furness designed nearly 1,000 projects for the Philadelphia engineers and industrialists who together transformed America. For this clientele Furness created a new architecture that incorporated the materials and expressed the energy of the Iron Age.

In 1873 the young architect Louis Sullivan (1856-1924) entered the Furness & Hewitt office. Many years later he recalled Furness' partner, George Hewitt, with his nose in books while Furness "made buildings out of his head." In making designs that expressed purpose instead of looting historical forms, Furness began the process that led to modern architecture.

For Sullivan, Furness' method was right and became the basis for his own architecture in Chicago. Sullivan passed Furness' ideas on to Frank Lloyd Wright who kept them alive in the twentieth century. Other Furness students continued the architectural evolution in Philadelphia including William L. Price and George Howe who form a link to the architectural values of the Philadelphia School of Louis Kahn and Robert Venturi.

To learn about the conservation of Furness' architectural drawings by the Conservation Center for Art and Historic Artifacts, click HERE.

For more information about Frank Furness, his projects, and his legacy, please visit the webpage, Frank Furness: Inventing Modern. 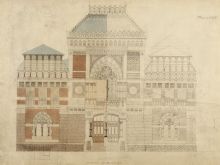 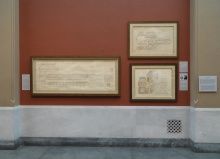