Beyond The Paint: Philadelphia's Mural Arts

In conjunction with the Mural Arts Program’s 30th Anniversary in 2014, this exhibition showcased the cumulative work of 30 years of community engaged art-making in Philadelphia.

Beyond The Paint: Philadelphia's Mural Arts presented archival and documentary material, including timeline-based information, interactive material, and images that were enlivened by the creation of new murals within the gallery space.

Since its inception in 1984, the Mural Arts Program has engaged thousands of diverse community members throughout Philadelphia in mural-making programs—from artists, students, and community leaders, to victims of crime and prison inmates—resulting in over 3,000 murals that have transformed the city, while highlighting the community-building power of art.

The Mural Arts Program’s efforts have earned Philadelphia  international praise as the “City of Murals,” and have helped build and sustain a vibrant community of artists in Philadelphia, many of whom are also students, faculty, and alumni of the Pennsylvania Academy of the Fine Arts. For this reason, it is particularly appropriate that PAFA hosted an exhibition chronicling and celebrating its artistic development.

Beyond the Paint particularly highlights the participation and grassroots ethic at the heart of Mural Arts’ 30 years of practice with the addition of three artists’ installations. Temporary Services, an artist collective based in Philadelphia, Chicago, and Copenhagen; New York-based artist Josh MacPhee; and Philadelphia artist duo Megawords produced new works that amplified and expanded the program’s art practice in both form and approach.

Temporary Services created an extended version of their popular “Self-reliance Library,” a reading space featuring a curated collection of books “designed to provoke the reader, solve creative problems, or suggest imaginative directions for a range of creative practices.” Megawords’ installation was a poetic and open-ended amalgamation of images and texts that examine the ways in which the state, the corporation, the institution, and the individual utilize ephemeral ideas such as creativity, citizenship, and imagination to produce art in the public realm. Josh MacPhee installed a temporary screen printing shop inside the gallery, which he then used during the run of the exhibition to create a series of collaboratively-produced “broadsheets” that collected poetry, journalism, illustrations, and personal stories from different communities. Each broadsheet was screenprinted collaboratively in the gallery by members of these same communities, along with PAFA students and Museum visitors.

In addition to the artists’ projects, a custom-built studio space inside the exhibition offered opportunities to glimpse Mural Arts artists at work, highlighting the creative and physical processes behind some of the Mural Arts Program’s most current projects.  Just outside the gallery space, artist Meg Saligman mounted a mural with the help of PAFA students. Celebrating the “lifelines” of every Philadelphian, Perception and Perspective invited visitors to contribute their voices to the dialogue around art, community and place-making. 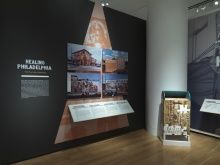 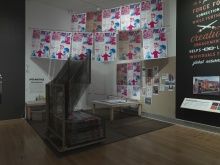 Josh MacPhee's installation in Beyond the Paint , 2014 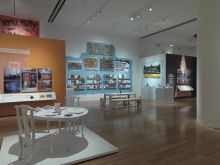 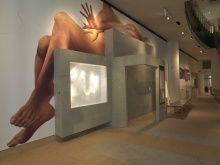 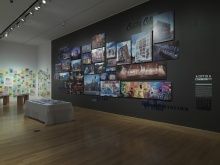