Of, To, and From Ray Yoshida

Ray Yoshida (1930-2009) had a profound effect on two generations of artists in and beyond Chicago. His dazzling comics-inspired imagery and eclectic taste as a collector provided inspiration for artists ranging from Jim Nutt to Chris Ware. Born in Hawaii but based for most of his life in Chicago, Yoshida studied at The School of the Art Institute of Chicago from 1950-54 and then taught there from 1959 through 2005. A visionary teacher, Yoshida put his ideas into practice through a series of groundbreaking collages he started in 1968 called “comic book specimens.” In these works Yoshida perversely mined image types from comics arranging endless, irregular rows of uniformed torsos discreetly missing limbs and heads, or with those appendages replaced by phantom hands and feet or outsized arms. This work fed into his paintings and the resulting transformations evolved into a startling new vocabulary of the body and its vibrant surroundings.

PAFA recently received a gift of seven Yoshida works dating from 1968-2003 from the artist’s estate. Two drawings by the self-taught artist Joseph E. Yoakum (1890-1972) owned by Yoshida also came with the generous gift. Yoshida was among the first to recognize the clarity and originality of Yoakum’s work and helped bring him to national attention. This installation brought together all of the gifts from the Yoshida estate along with major works from PAFA’s collection by artists influenced by him, including Edward Flood, Art Green, Gladys Nilsson, Jim Nutt, Christina Ramberg, Suellen Rocca, and Barbara Rossi. Collective material by the Hairy Who and False Image groups were also on view. 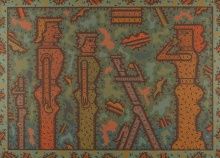 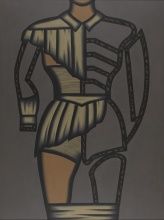 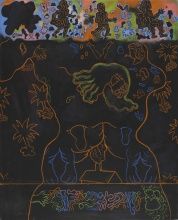