After Tanner: African-American Artists Since 1940

Henry Ossawa Tanner (1859-1937) was a mentor and role model for younger artists during his lifetime and has been a source of pride for many generations of artists since his death. This installation, drawn largely from PAFA’s collection and supplemented by several major loans, broadly celebrated what Tanner’s career inspired and made possible in its wake. Tanner was a trailblazer, bravely choosing his own path and attaining international stature in the arts despite innumerable societal challenges. He was also an innovator of African-American genre painting and in religious subjects, where he made his most lasting and powerful contribution to the story of art history. It is not unreasonable to assert that Tanner’s professional example together with the quality of his work made it possible for subsequent generations of African-American artists to pursue their aspirations in the art world and transform American art in the 20th century.

Some of the artists included in this installation sought out and met Tanner, including William H. Johnson and Hale Woodruff. Other artists, such as Reginald Gammon, made paintings in homage to Tanner. Others, such as Romare Bearden and Alma Thomas, took up religious themes that meant a great deal to Tanner, and reworked them by using new materials and a modernist visual language unique to their time. Contemporary artists such as Laylah Ali, Willie Cole, Glenn Ligon, Quentin Morris, and Kara Walker explore identity and a complex cultural past in ways that Tanner could not have imagined. Together this ensemble suggested the innumerable channels for expression Tanner’s example opened up for African-American artists working in the wake of his career.

Special thanks to lenders Bill and Navindren Hodges, Lee and Barbara Maimon, Michael Rosenfeld and halley k harrisburg, Ann R. and Harold A. Sorgenti, and a generous private collector. 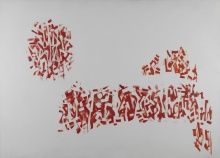