When Taylor Freeman (BFA ’22) poses his subjects for a sculpture, he wants them to feel comfortable, like themselves, and strong.

“Being able to put someone in a pose that liberates them without having to say any words is great,” Freeman said. “I want to capture a person in a way that when someone looks at the sculpture, they say, ‘yea, that’s really them’.”

The second-year sculpture major hopes his work empowers the people he portrays.

A painting series he completed after high school focused on people from his hometown in the suburbs of Baltimore.

“I’m trying to convey something more than poverty from where I’m from, a sense of liberation for the people that are in the community, he said. “I have about five paintings of my brother because he’s such an inspiration to me and he’s going through a difficult time right now.”

His home community is what brought Freeman to PAFA. His high school art teacher, PAFA graduate Jake Barnhart, encouraged Freeman to make art and opened his classroom up to student artists at Pikesville High School.

Now that he’s learning where his high school mentor once studied, Freeman is adding new advisers to the community of artistic voices who are guiding him.

“I really like Steve Nocella, he is my favorite teacher. He’s taught me a lot about welding and plaster sculpture and bronze pours. I want to learn all of that stuff and soak it up while I’m here.”

Freeman wants to learn everything PAFA offers but acknowledges that not all of the mediums taught at PAFA are for him.

While he painted in high school, he finds himself struggling in oil painting classes. He says with oil painting there is less opportunity to layer paint because of the long drying process and that trying to layer can end up ruining a work. So Freeman said there is an inherent pressure to mix color exactly how you want before it hits the canvas.

He’s trying to learn what he can from the classes and use that knowledge in his art practice but another one of his PAFA mentors, painter Peter Van Dyck tells Freeman not to be too hard on himself.

“Peter said I shouldn’t force myself to go down a path when I know I want to do something else,” he said. “I’m going to stick with the oil painting class I have now and learn from it.”

A recent summer internship with Mural Arts Philadelphia, kept Freeman under the wing of PAFA mentors. Working with muralist and PAFA graduate David McShane (MFA ’95), Freeman learned about working with a broader community on a project and how to translate images into art.

“David showed me the way he way he makes his murals and breaks them down in Adobe Photoshop so he can make a grid for the mural,” he said. “I’ve taken some of those techniques and used it in my own paintings. I don’t think I’ll ever revert back to the way I used to paint after learning from David.”

After graduation, Freeman wants to explore making more public art. He believes everyday citizens should be represented in the art that cities invest in.

“I think there should be more public figure sculptures, we should give the community better sculptures,” he said. “I want to see regular people represented in sculpture, like someone just walking down the street. Why don’t they get immortalized forever?” 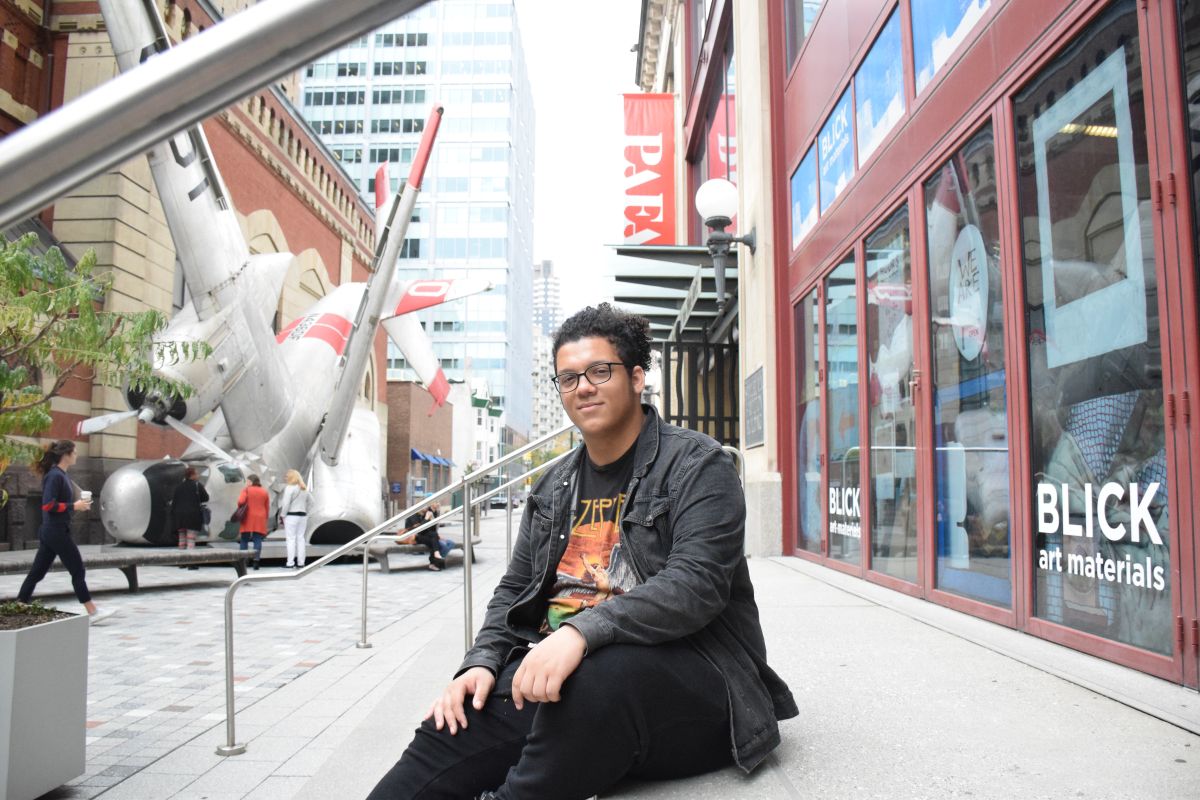