Moving From Master Printmaker to Painter

For the past seven years Mike Kondel (MFA ’19) has been helping artists make work as a master printer. But now he wants to create something for himself.

“I was a technician and I wanted to be an artist,” Kondel said. “I was making my paintings every day at home and going to work, it was really crazy.”

The idea of going to grad school had been in his head for a while but it took meeting PAFA MFA program chair Didier William to get Kondel to fully commit to the idea and apply. The two met when William brought a PAFA class to the print shop Kondel was working at for a talk and tour of the facility. Kondel gave the class a talk but it was William’s word that left a mark on him.

"Once I met Didier it was like: I want some of that, what he’s got. I needed a change," he said." I was working with other artists, bringing their projects to fruition, which was great for a while but then I noticed how tight I was in my own studio. I hadn’t been exposed to this higher level of education of how to look at art and talk about it."

Now in his second year of the MFA program at PAFA, Kondel is making a conscious decision to step away from printmaking and focus on painting.

“I don’t make any of my own work in print, I only print for other artists. Throughout my whole life that's how it was,” he said. “In undergrad, I’d have to make prints for myself because there wasn't an artist there. But even then I wanted to work for a painter in the painting department so they could have prints.”

For him, the print shop has always been a place to share a technical skill and help other artists make their work.

“I’m accurate, I know my measurements, and I know the quality of paints and finishes. It’s more like a car shop than an art factory,” he said. “It's a technique, there’s some skill, it's very physical. You’re a machine a little bit, and I loved that.”

The work Kondel makes for himself, mostly large acrylic paintings on canvas, is centered around his upbringing in rural Michigan.

When he left Michigan for New York for undergrad, Kondel said he was exposed to new things and places. He hopes his work does the same for others, exposing them to an unfamiliar part of the country and culture.

“I’m not trying to enter the political conversation but I want to show these meditations in the rural and the landscape of America that exists in a majority of the country.”

His works reference many people’s desires for more analog and handmade items in the digital age we live in.

“I always wanted things to have a handmade edge to them or a mechanically made edge to them. Coming from Flint and off a farm, I always had that blue-collar type of aesthetic,” he said. “This generation of millennials I’m in, they’re looking for substance and want a connection to the earth.”

Even though he’s putting printmaking to the side right now, Kondel hopes to share his knowledge and skill after he graduates. He trained with many printers who came of age in the 1960s and doesn’t want their knowledge to be lost.

“The guys I trained under were all darkroom guys and all of that stuff is almost gone but people still need it,” he said. “People still need to use it all the time because the digital side hasn't really filled in when you work really large.”

Just as printing has been a steady career for Kondel, he hopes to educate the next generation of young artists and help them have some stability in an art career.

“I’d love to get into an education system where I could let kids know about the old techniques of printmaking,” he said. “Many of them don’t even know these techniques exist and it could them get a job or troubleshoot problems in a job they have in a shop.” 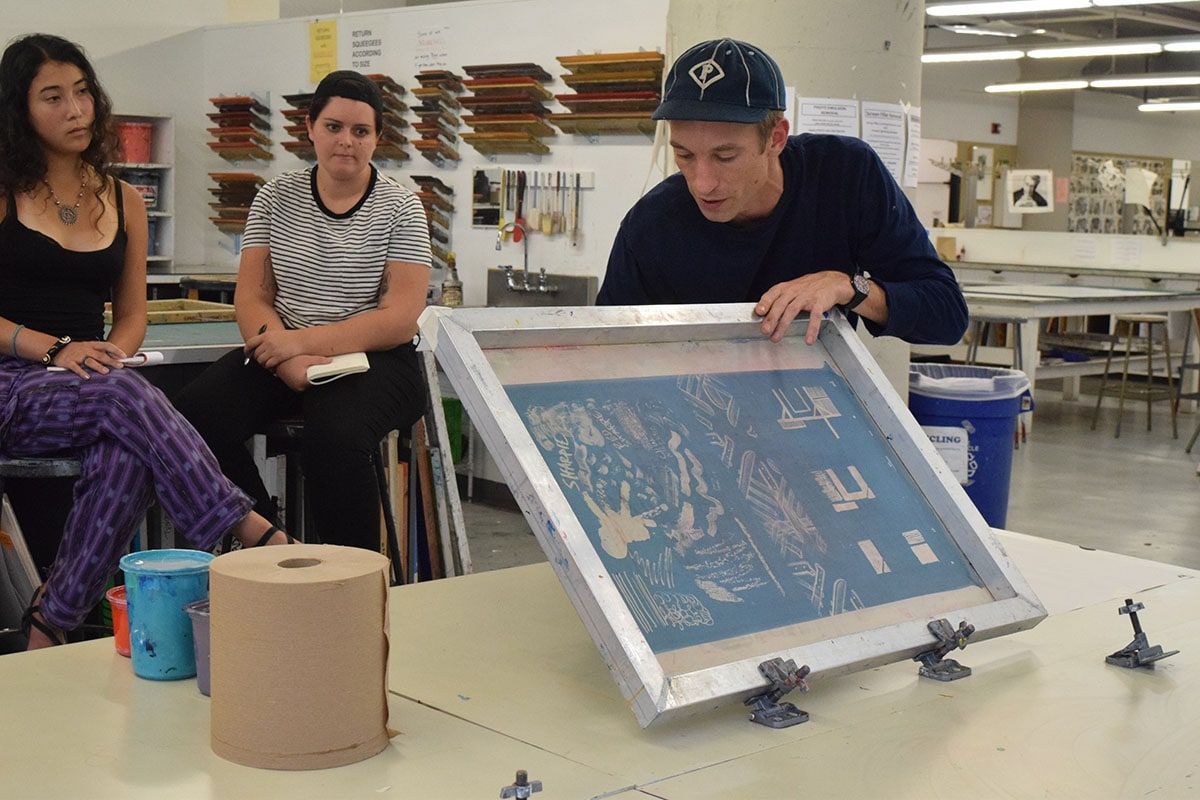 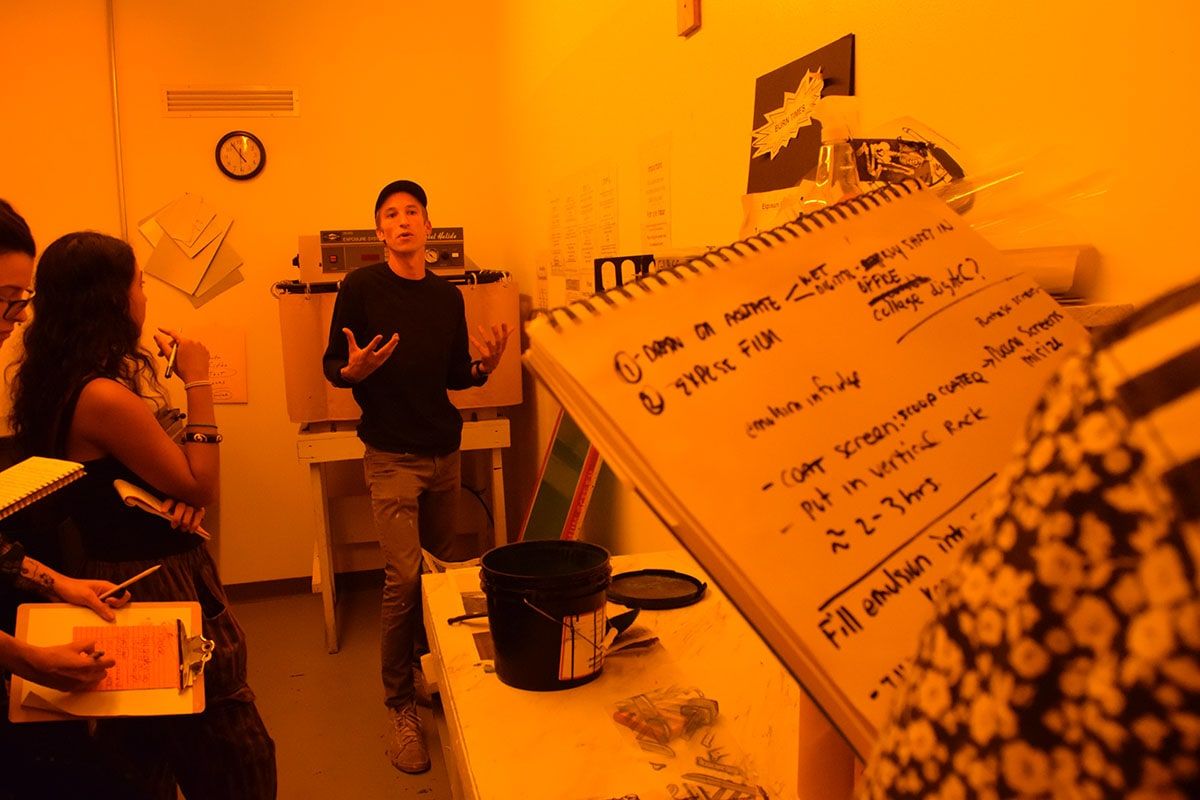 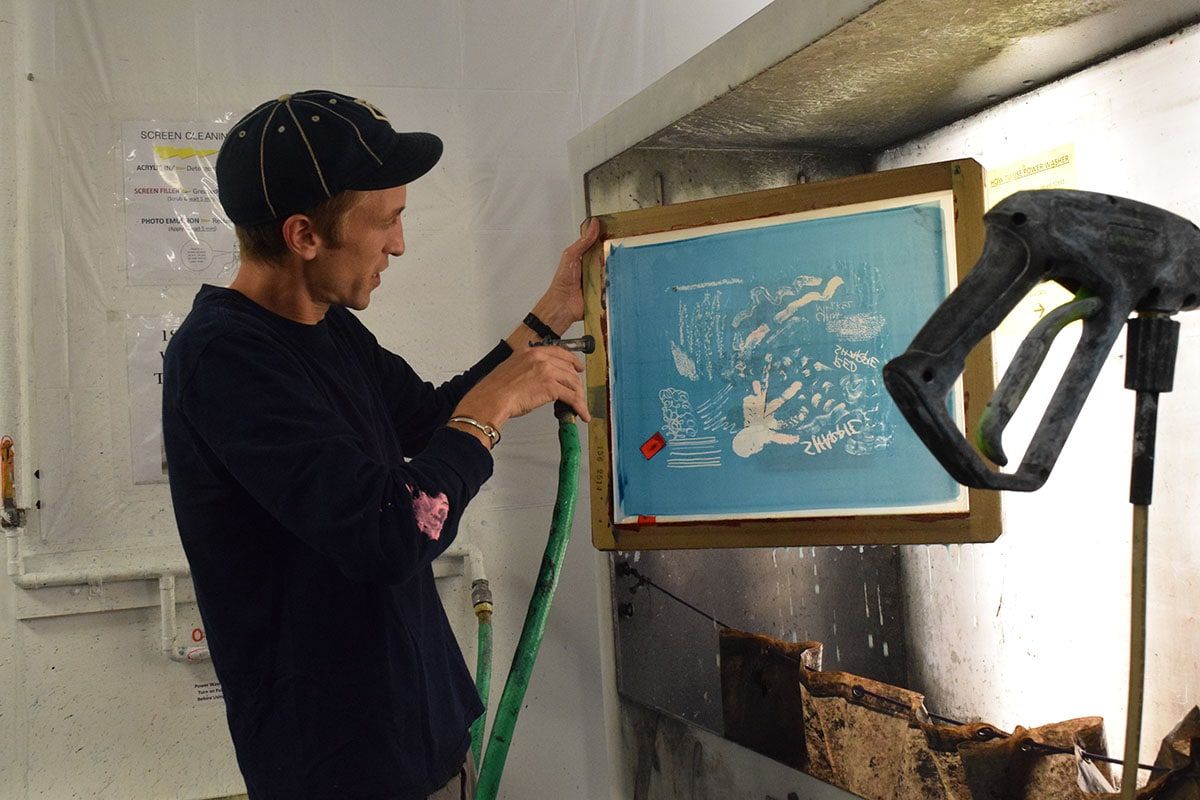 Mike Kondel (MFA '19) washes a screen in the print shop.