Eye Contact, on view through September 15, 2019, is an exploration of contemporary artist self-portraits in conversation with PAFA’s 19th-century masterpieces.

“We have a lot of great artist self-portraits in the collection but in recent years we’ve added a few significant ones,” said PAFA contemporary curator Jodi Throckmorton.

Recent acquisitions include Daddy Likee? by Kukuli Velarde and Self-Portrait (1977) by Joan Brown.

Throckmorton says the portraits in Eye Contact are making a statement about we see and judge ourselves to each other and stand in stark contrast to works in our permanent collection from the 19th century.

“I like the way these artists play with how you look at them and how they’re looking at you,” she said.

Across from the contemporary artist self-portraits in the Salon gallery, PAFA is exhibiting John Vanderlyn’s Ariadne Asleep on the Island of Naxos (1809-14), one of the first nude paintings shown in the United States.

“_Ariadne_ is my counterpoint to these works. She is a super sexualized classical nude painted by a male painter,” Throckmorton said. “And then you have Kukuli Velarde’s work across the room. The painting is her 50-something-year-old body at post-child. She is staring right at you like a dare. Whereas Ariadne is very sexy.”

Eye Contact shows how contemporary artists are taking control of gaze and how they are portrayed.

Feminist film theorists developed the concept of the gaze in the 1970s exploring the dominance of masculine, heterosexual perspectives in visual art. The artists of Eye Contact use this concept of “othering” or “male” gaze to turn the gaze back on the viewer, to their own paintings and interior thoughts, or to the 19th-century masterpieces situated on the gallery's opposing walls.

“Historically it’s been a very white, straight, male perspective in art history and there’s very little of that going in Eye Contact,” she said.

The embedded bias in nudity in art bubbled up at PAFA as Eye Contact was being planned. *Pluto: Robert Lucy by Sylvia Sleigh is a 7½-foot, full-frontal nude portrait of a man. The museum displays full-frontal female nudes, like Ariadne, without specific warnings or signs. But the question was raised if the museum should inform people that there is a nude painting of a male figure on view. Ultimately, the museum staff decided on labels at the entrance of the gallery that strives to contextualize the nude in art rather than warning visitors.

“It reveals the hypocrisy in culture. Why is it okay to sexually objectify a woman’s body and not even show a naked male body,” Throckmorton said. “It’s an interesting question.” 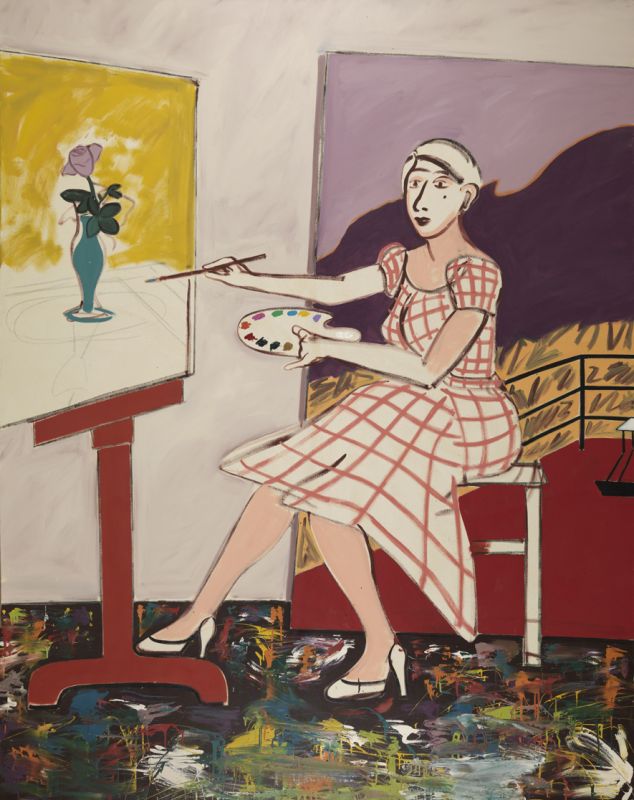