If you’re looking to learn about weaving and need a loom, head to Sara Havekotte’s studio on the 8th floor of the Hamilton building. The second-year MFA student is currently the only weaver in her program.

“I’ve always sewn and stitched, and made little handcrafts on the side,” Havekotte (MFA ’20) said. “This is something my family has done for generations, but I had never really looked at is as anything other than a way to sort of decompress at home.”

After graduating from MICA in Baltimore, Havekotte spent a few years working in galleries and taking a break from school. She started to feel the pull back towards academia in 2017 and enrolled in PAFA after seeing the experience friends had here.

“I picked PAFA because I really liked how open-ended the program was, how material based it was,” she said. “I wanted somewhere I could get to my family easily, I can take the train to Pittsburgh. And I wanted somewhere that was kind of close to Baltimore but obviously not Baltimore.”

She initially came to Philadelphia in 2018 to study painting and making paintings for collage. But as Havekotte took classes, her work stayed in a material and textile base.

She now weaves and sculpts with found objects.

“Things began to sort of compact in a singularity of home and comfort, and what really drives me as a maker sort of atomically fused and now we’re here.”

Even though Havekotte is at the beginning of her experience in craft, she credits working at Goya Contemporary Gallery in Baltimore with exposing her to the medium in a fine art setting. The gallery shows the work of MacArthur Foundation Fellow, Joyce J. Scott, a jewelry maker and sculptor, striving to reposition craft.

“I sort of hesitate to say that I’m a craft artist and people often think that means I’m ashamed of craft but it’s because I’m so new to it and I can’t speak to it,” she said. “I know enough to know that I am very green.”

She may be new to the medium but is relying on old memories to create. Currently in her studio Havekotte is weaving a piece that tells the story of a long friendship.

“My friend Maddie and I have known each other for about 7 years now. We met in a painting program at MICA, where we spent 4 weeks in Italy,” she said. “In the resort town we were in, there was this really old colonial ship and every day we’d try to swim out to touch this boat. We never achieved it.”

Woven into the piece are shells, ceramic pieces, and a small ship. She often starts with text or poetry she’s written and then creates a loose narrative that is then described materially.

Since Havekotte is the only weaver in her program she looks to friends outside the program for technical critiques on her work and leans on her fellow students for emotional support. 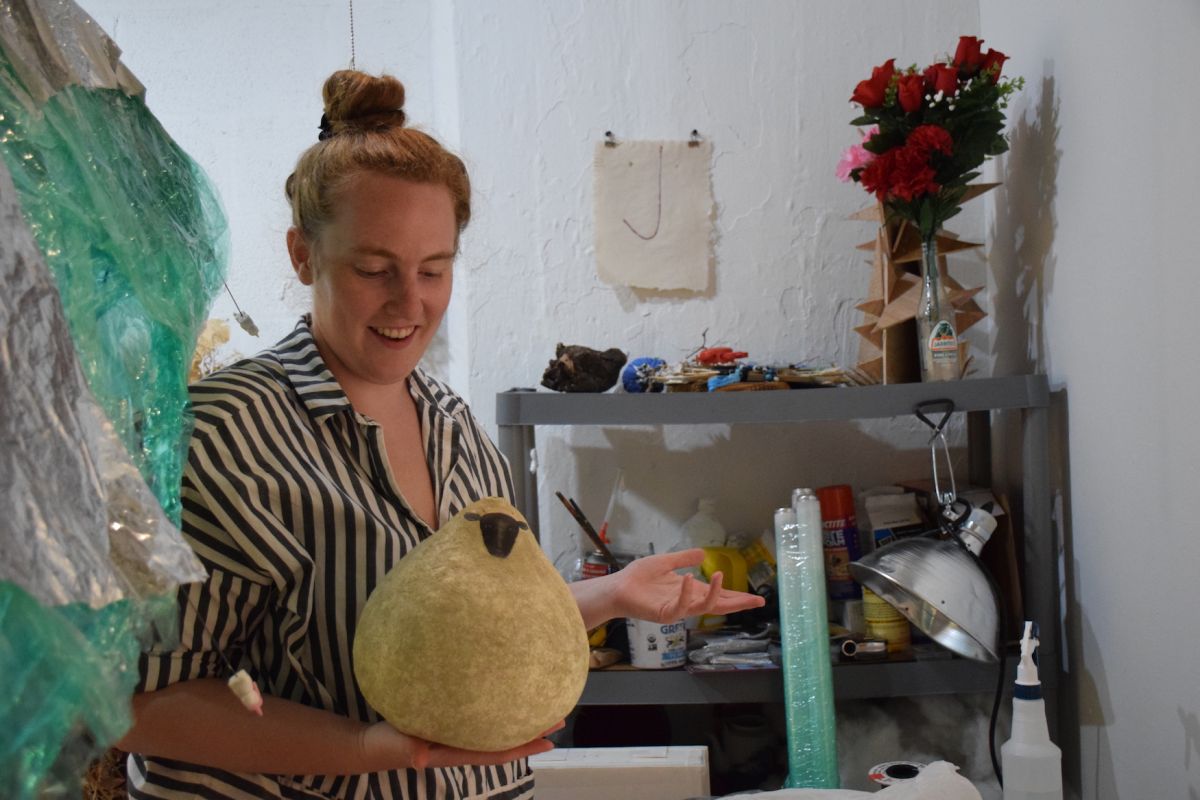 Sara Havekotte (MFA '20) in her studio