Timothy Curtis: If I Had Your Hand I'd Cut Mine Off 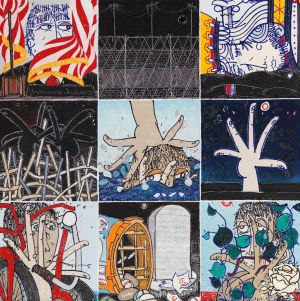 Timothy Curtis' story is also a Philadelphia story. He began making art as a graffiti writer in Philadelphia during the early 2000’s and remains closely tied to his family and community. Today Curtis lives and works in Brooklyn. His paintings and drawings regularly return to the expressiveness and layered palimpsests of wall writing. In addition to graffiti forms, Curtis references symbols and images sourced from popular culture, art historical canons, and his biography. Curtis developed a prolific drawing practice while incarcerated for seven years, which continues today and has allowed him to build an expansive iconography. Curtis' work is currently on display in the exhibition Negotiating Grids.

Join Timothy Curtis and Lori Waselchuk, PAFA's Assistant Director of Public Programs, as they talk about Timothy’s practice, graffiti in Philadelphia, and ideas about freedom.

Timothy Curtis [b. 1982] is a self-taught artist from Philadelphia, who lives and works in New York City. His work was debuted publicly in the U.S. at the Brooklyn Museum as part of the group exhibition Coney Island Is Still Dreamland (To a Seagull) by the artist Stephen Powers (2015-2016). Curtis realized his first solo exhibition in November 2017 at Kaikai Kiki’s Hidari Zingaro gallery in Tokyo, Japan, curated by Takashi Murakami. Curtis had his first solo show in New York with Albertz Benda (2019) and was featured in the group exhibition The Pencil is a Key: Drawings by Incarcerated Artists, organized by Claire Gilman of The Drawing Center, New York in 2019. For the 2020 edition of The Armory Show, Timothy presented a solo exhibition titled Alive-n-Well with Albertz Benda. Recent shows include 100 drawings from Now at The Drawing Center, New York (2020), The Cat’s Cradle at Albertz Benda, New York (2021), and Negotiating Grids at Pennsylvania Academy of the Fine Arts, Philadelphia, PA (2022).

Curtis is set to present new paintings with Albertz Benda at Untitled Art Fair in Miami (December 2022), as well as City as Studio at K11 Art Foundation Hong Kong curated by Jeffrey Deitch in March 2023.

Art At Noon lectures are supported by the Behrend Family in memory of Rose Susan Hirschhorn Behrend, a former docent at the Academy and great supporter of its education programs.

Image: Timothy Curtis, If I Had Your Hand I'd Cut Mine Off,  Oil, oil stick, wax pastel, graphite on canvas, 72 x 72 inches.