Harriet Hosmer and the Cis-tems She Defied 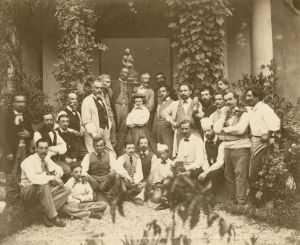 Historian Beans Velocci and Lori Waselchuk, Assistant Director of Public Programs, will celebrate the life and art of Harriet Hosmer while discussing the history and consequences of binary sex classification systems. Harriet Hosmer broke new ground for women in American Art becoming one of the most successful sculptors of the 19th Century. Hosmer pursued her creative vision fiercely, finding workarounds to many of the restrictions placed on American women. Through her extraordinary life as a queer artist, she created a new possibility for being that challenged the meaning of womanhood itself.

Beans Velocci is a historian of sex, science, and classification. They are a Lecturer (Assistant Professor effective July 2022) in the Department of History and Sociology of Science and Program in Gender, Sexuality, and Women’s Studies at the University of Pennsylvania. Their work uses queer, trans, and feminist methods to interrogate how classification systems become regarded as biological truths. Their first book project, tentatively titled Binary Logic, is a prehistory of cisness that looks at how sex emerged as a privileged way of sorting bodies not despite but because of its incoherence. Their work has been published in Transgender Studies Quarterly, Washington Post, and Avidly, and is forthcoming in Historical Studies in the Natural Sciences and an edited collection called Feminism Against Cisness. Beans holds a PhD, MA, and MPhil from Yale University, an MA from the University of Utah, and an AB from Smith College.

Image: Harriet Goodhue Hosmer with her assistants and carvers in the courtyard of her studio in Rome, 1867. Albumen print, 11 2/5 x 16 1/2 in. (9 x 41.8 cm). Hertzmann Collection of Photographs of American Artists, National Gallery of Art Library, Washington, DC.