Film and Indigenous Perspectives on the Environment 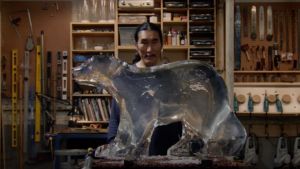 What does it mean to make art about a warming Arctic without sentimentalizing or spectacularizing suffering? Indigenous literary theorist Gerald Vizenor uses the term “aesthetics of survivance” to articulate the central place of creative visual story-telling in indigenous knowledge to address climate trauma. Bloom will build on this tenet by investigating films about the Arctic that call forth new forms of representation and narrative on the climate crisis by pushing the viewer to imagine a different way of seeing, feeling, knowing and surviving in the face of a fast-changing landscape.

This is class three in a three-part The New Aesthetics of Climate Change class
In each of the three talks in this series, writer and scholar Lisa E. Bloom brings art into conversation with the climate crisis. Connecting research from her forthcoming book Critical Polar Aesthetics: Art and the Climate Crisis in the Arctic and Antarctic with the strategies of science fiction, speculative fiction, epic, comedy and tragedy, this class considers how aesthetics and the imagination can be used to orient us toward a more just and resilient world. Over three weeks, Bloom will bring together issues too often kept separate from conversations about science and climate change - gender, sexuality, race, postcolonial relations, and even art history - and presents a compelling narrative about the interdependency of the human and the non-human, the resilience and resistance of indigenous communities, and the pervasiveness of resurgent nationalisms and globalizing capitalism.