Expressions of Trauma, Journey Towards Care 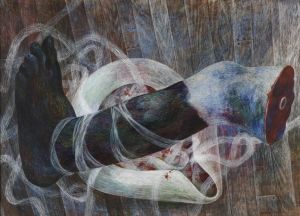 Christiana Cruz-Council, curator of Strange Sensations: The Startling and Surreal in PAFA's Permanent Collection, will be in conversation with Dr. Sami Khella, the Chief of the Department of Neurology at Penn Presbyterian Medical Center, a Professor of Clinical Neurology, and exhibiting artist, about the artistic impulse to visually express experiences of trauma, illness, and pain. Centering the work in Strange Sensations, Dr. Khella and Cruz-Council will talk about how visualizing frightening experiences can help us better understand them, as well as aid the artist's journey towards self-care.

Christiana Cruz-Council is a Philadelphia native and a graduate of the University of Scranton. Christiana is pursuing a Master’s Degree in Museum Studies at Harvard University. Until recently, Christiana was PAFA's Museum Coordinator, where she discovered a passion for public education and led private and public tours of PAFA's collection. Christiana’s curatorial debut, Strange Sensations: The Startling and Surreal in PAFA’s Permanent Collection, opened in June of 2022 and is on view through April 2023. Christiana also co-curated Evade and Ensnare: Decorative Illusionism in Historic and Contemporary Painting with Juan Omar Rodriguez, which opens at PAFA September 8, 2022. As the mother of a two-year-old, Zeus, she looks forward to continuing to work in the arts and pass down her passion to him.

Sami Khella is a Philadelphia based artist with an eclectic history. He was Born in Egypt to a wonderful artist his Mom, Mary. He grew up living with her large, colorful, other worldly gouache and oil paintings of the river Nile and its native inhabitants. In the 1970's He studied with Neil Welliver in the Graduate School of Fine Arts at the University of Pennsylvania. And in the 2000's, he spent time with the late and generous Hitoshi Nakazato making prints. Khella draws his inspiration from his family, especially, his wife, Dorothy, who pops up everywhere in his work. For him, making art is a way to express those feelings and emotions that can't be encapsulated and described in words. When not working in his studio, or playing soccer, he practices Neurology at the University of Pennsylvania.

This event is presented in partnership with the College of Physicians of Philadelphia.

Art At Noon lectures are supported by the Behrend Family in memory of Rose Susan Hirschhorn Behrend, a former docent at the Academy and great supporter of its education programs.

Links
The College of Physicians of Philadelphia
Related
Strange Sensations: The Startling and Surreal in PAFA’s Permanent Collection