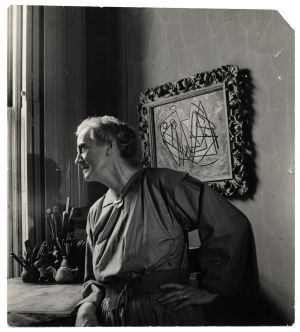 Atelier 17 was an avant-garde printmaking studio in New York City between 1940 and 1955 that served as a space where women artists like Anne Ryan, Miriam Shapiro, and Dorot​hy Dehner were able to gain exposure and create ground-breaking work in modernist styles of abstraction, surrealism, and expressionism.  Dr. Brittany Webb, the Evelyn and Will Kaplan Curator of Twentieth Century Art and the John Rhoden Collection, will be in conversation with Christina Weyl, author of The Women of Atelier 17: Modernist Printmaking in Midcentury New York (Yale University Press, 2019) and creator of the online biographical supplement, about the importance of this studio and the contributions of the women artists who created there.

Christina Weyl is an independent scholar and curator with expertise on twentieth-century American printmaking. She received her BA from Georgetown University (2005) and completed her MA and PhD in art history at Rutgers University (2012, 2015). Her recent book, The Women of Atelier 17: Modernist Printmaking in Midcentury New York (Yale University Press, 2019) highlights the nearly 100 women artists who advanced modernism and feminism at Atelier 17, the avant-garde printmaking studio located in New York City between 1940 and 1955. With the support of a major grant from the Getty Foundation, she is currently co-curating an exhibition with Lauren Rosenblum for the International Print Center of New York focusing on Margaret Lowengrund and her pioneering effort to establish The Contemporaries as a hybrid printmaking workshop/gallery. She has published in Art in Print, Print Quarterly, and Archives of American Art Journal and contributed to several anthologies and exhibition catalogues. From 2014-2018, she served as Co-President of the Association of Print Scholars, a non-profit professional organization she co-founded in 2014. Prior to her graduate studies, she worked for Gemini G.E.L. at Joni Moisant Weyl, which represents the publications of the Los Angeles–based artists’ workshop Gemini G.E.L.