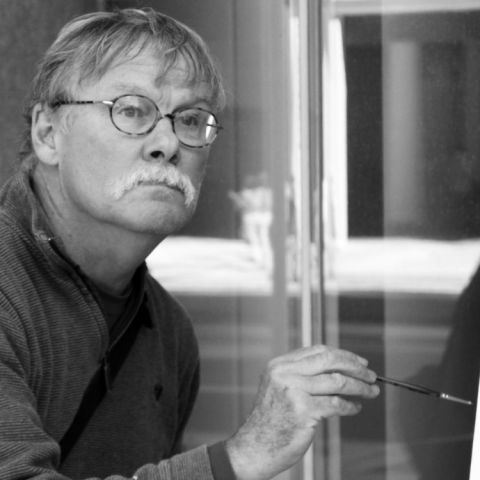 Larry Francis is a Philadelphia native who has painted on the streets of the city from the early part of his life in art. He studied painting at PAFA, where he was awarded the J. Henry Schiedt European Traveling Scholarship in 1970. His first career solo show was held at the Peale House Galleries of PAFA in 1979.

Over the years, Francis has received a number of awards, including the Julius Hallgarten Prize from the Academy of Design, New York in 1972, the Mary Butler Award from the Fellowship of PAFA in 1996, the Charles Knox Smith Founders Prize at the Woodmere Art Museum in 2002 and a Prize for Painting at Cheltenham Art Center in 2011.

His work is in many public and private collections, including the Noyes Museum of New Jersey, Woodmere Museum in Chestnut Hill, and the Federal Reserve Bank, Philadelphia. Francis is represented by Gross McCleaf Gallery, where he has had a dozen solo shows. He can be seen in the short film Larry Francis: Painting Philadelphia, by John Thornton.

Francis teaches Landscape Painting and Narrative Drawing in the Certificate/BFA program. He also teaches courses in the Continuing Education program.