In the Rotunda Street View (Hoagiefest) by Alex Da Corte, a phototex of the artist’s hand clutching a Wawa donut is layered with Perry’s Victory on Lake Erie by Thomas Birch, a triumphant battle scene during the War of 1812.

PAFA’s contemporary curator Jodi Throckmorton says the two works, one a celebration of the US during wartime in the 1800’s and the other commemorating Philadelphia’s beloved convenience chain, have more in common than you might think.

“The war of 1812 was essentially a fight for commerce on the Atlantic so it’s about capitalism,” Throckmorton said. “When you look at that donut, I am thinking about patriotism and capitalism and commerce, and the shift between 1812 and now 200 years later.”

Ancient History of the Distant Future, a collaboration between PAFA and KADIST, put artworks from PAFA’s permanent collection in conversation with thirteen contemporary artists as they look at history and find new meaning in the present.

Joseph del Pesco, International Director of KADIST, says he and Throckmorton wanted to put the contemporary in conversation with the historic and find points of resonance and context between PAFA and Kadist’s collections, along with commissions from contemporary artists.

Elements of Beauty by Carla Zaccagnini takes over half of the Salon Gallery and is an homage to the women’s suffrage movement in England and the role art played in the tactics of the suffragettes.

The series of silhouettes are the same size of the paintings that English suffragettes attacked in British museums in 1913 and 1914, as part of their campaign for women’s voting rights in Britain.

“We’re not encouraging anyone to slash painting but this is an introduction to the history,” Throckmorton said. “And this across from ‘Ariadne,’ reinforces what the suffragettes were talking about. The fact that women would be depicted like this in paintings but not be able to fully participate in society, that’s what they were reacting to.”

The friction between PAFA’s historic collection and the contemporary art in “Ancient History” carries over into the colonial gallery. Alongside portraits of prosperous Americans in the 18th century, some of who gained wealth through exploitative labor practices including the trade in enslaved people, is a photo of a ‘Union Rat’ in North Philadelphia’s Kensington neighborhood.

Street View (Union Rat), also by Alex Da Corte shows the inflatable rat used by unions in labor protests. It is installed near Benjamin West’s “Penn’s Treaty with the Indians,” which presented an idealized version of William Penn’s meeting with the Lenape people. Da Corte considered the way that rats spread disease to indigenous populations during the colonial period.

“Some people are going to love it and some people will hate it and I think that's a nice reaction. I want someone to be startled,” Throckmorton said. “I like to think the audience will sit and look and think about how these things connect to each other.”

Throckmorton wants visitors with varying art interests; whether historic or contemporary, to give all the work in the exhibition and museum a chance for consideration.

“I hope someone who comes in to see PAFA’s historic work will look twice at something contemporary but I also hope the inverse. That someone will come in to see Alex Da Corte or Mungo Thomson and will look at the Civil War paintings and be more interested. I’ve found that’s happened to me since being here, I’m much more likely to not shrug off historic work.” 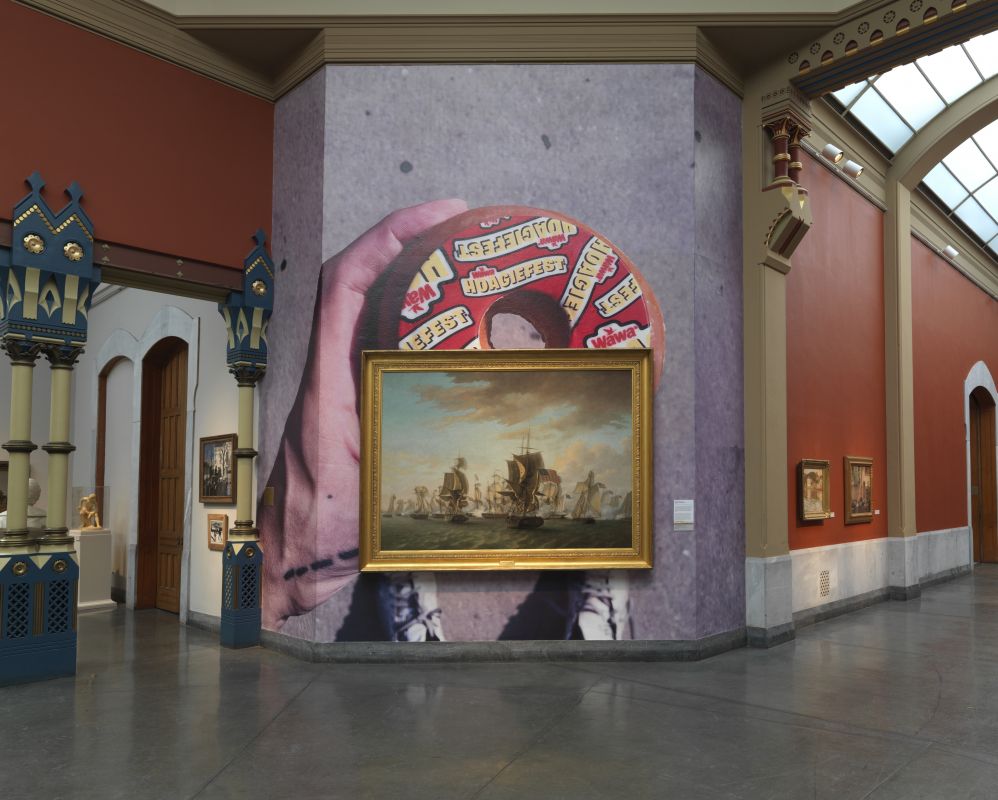 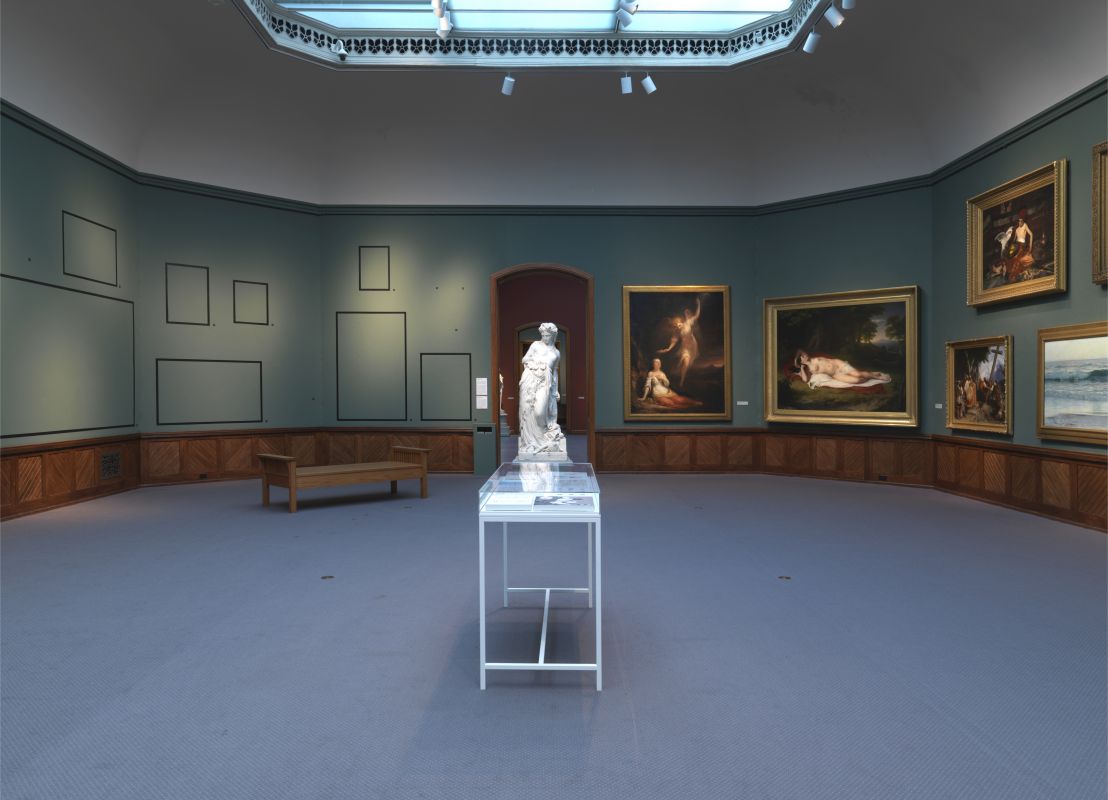 Salon Gallery view of "Ancient History of the Distant Future" 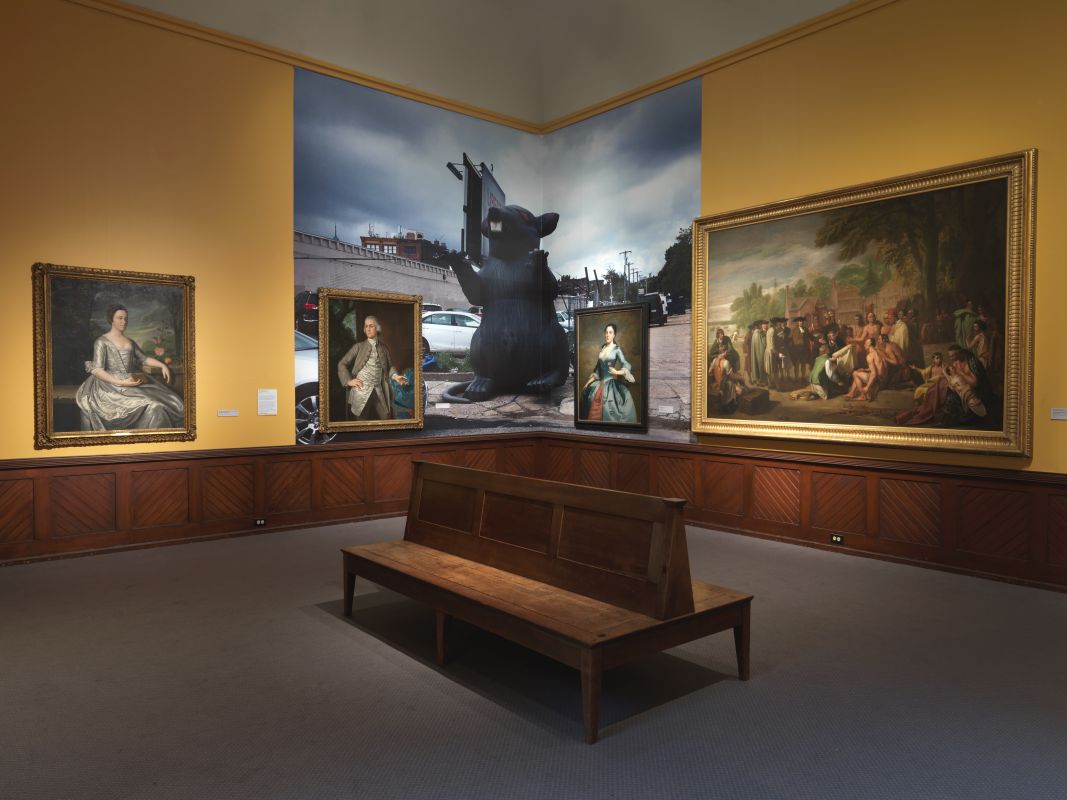