View from the Future: Women Artists, Writers and Filmmakers Turn to Science Fiction 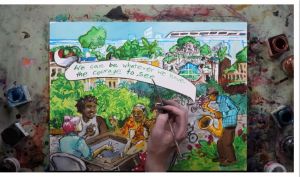 Why do writers and filmmakers turn to the genre of science fiction to question routine assumptions about the natural world and its future development? The lecture will compare a short science-fiction style text written by well-known science studies scholars, Naomi Oreskes and Erik Conway, titled The Collapse of Western Civilization: A View from the Future (2014) with a short science fiction film  “A Message from the Future With Alexandria Ocasio Cortez, 2019” by the artist Mollie Crabapple that is a collaborative effort with the author and activist Naomi Klein and filmmaker Avi Lewis narrated by the politician Alexandria Ocasio-Cortez.

Suggested Homework: Reading introduction and conclusion to Naomi Oreskes and Erik Conway’s The Collapse of Western Civilization: A View from the Future (2014).

This is class two in a three-part The New Aesthetics of Climate Change class
In each of the three talks in this series, writer and scholar Lisa E. Bloom brings art into conversation with the climate crisis. Connecting research from her forthcoming book Critical Polar Aesthetics: Art and the Climate Crisis in the Arctic and Antarctic with the strategies of science fiction, speculative fiction, epic, comedy and tragedy, this class considers how aesthetics and the imagination can be used to orient us toward a more just and resilient world. Over three weeks, Bloom will bring together issues too often kept separate from conversations about science and climate change - gender, sexuality, race, postcolonial relations, and even art history - and presents a compelling narrative about the interdependency of the human and the non-human, the resilience and resistance of indigenous communities, and the pervasiveness of resurgent nationalisms and globalizing capitalism.