The Portrait of Hanadagá•yas; or, George Washington Reconsidered 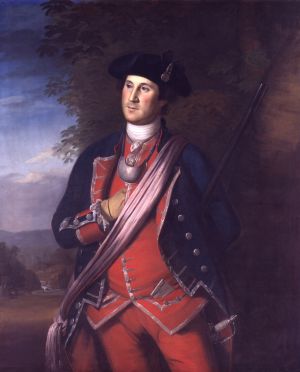 Janine Yorimoto Boldt considers the first known portrait of George Washington, painted by Charles Willson Peale in 1772, as a portrait of “Hanadagá•yas,” the Haudenosaunee name for Washington meaning “Town Destroyer.” The painting references coveted Indigenous land and represents Washington in his militia uniform from the Seven Years’ War (1756-63), an imperial conflict for North American territory. The painting later inspired narratives about national expansion and became entangled in the myth of the Lost Cause when it was donated to Washington and Lee University. This talk foregrounds the acts of dispossession perpetrated by Washington and central to the history of his first portrait to reveal how art can preserve and inspire violent myths of empire.

Janine Yorimoto Boldt is the Associate Curator of American Art at the Chazen Museum of Art at the University of Wisconsin–Madison. She previously worked at the American Philosophical Society and Colonial Williamsburg and she earned her PhD in American Studies from William & Mary. She is the researcher behind ColonialVirginiaPortraits.org, a digital project produced in collaboration with the Omohundro Institute of Early American History & Culture. Her scholarship on early American art and culture has been published by American Art, the American Philosophical Society, Panorama, and she has a forthcoming article in Winterthur Portfolio.