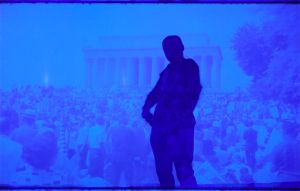 Please join the PAFA Youth Council as they highlight the artistic practice of two Philadelphia artists, Maria Dumlao and Rachael Moton, and how support from the Leeway Foundation has impacted their careers. This event is the culmination of PAFA's 2021-22 Youth Council’s research and engagement with the Linda Lee Alter Collection and its legacy. Linda Lee Alter founded the Leeway Foundation in 1993  “to promote the welfare of women and to benefit the arts” in the five-county Philadelphia area and “encourage their increased recognition and representation in the arts community.”

PAFA Youth Council is a free after-school program that offers interested teens a chance to create a prominent place for young audiences in the daily life of the museum.

Maria Dumlao works with combined media, including film, video, animation, sound, photography, embroidery and installation.  Her work combines images of history, popular culture, mythic folklore, landscapes, and creatures to propose alternatives to the systemic representations ordered by colonial narratives. Born in the Philippines, Maria immigrated to the US mainland, where she currently lives and works in the traditional territory of the Lenni-Lenape (Philadelphia area). Most recently she completed a commissioned installation for Auckland Museum and Smithsonian Asian Pacific American Center in Aotearoa New Zealand and awarded the Center for Emerging Visual Artist Fellowship and the Leeway Transformation Award.

Rachael Moton is a writer, director, and lover of memes. Her obsession with weird indie films and reality television led her to attend Temple University where she graduated with a BFA degree in Film with a concentration in Directing. Her work has been supported by various organizations including Sundance Institute, SFFILM, The Westridge Foundation, TIFF, and The Gotham. As a storyteller, Rachael is passionate about sharing stories of marginalized people with the goal of promoting empathy, usually by utilizing comedy. In addition to filmmaking, she is a coordinator at Leeway Foundation and teaches youth film courses at Moore College of Art and Design. If she wasn’t a filmmaker, Rachael believes she would’ve been a great reality tv star.