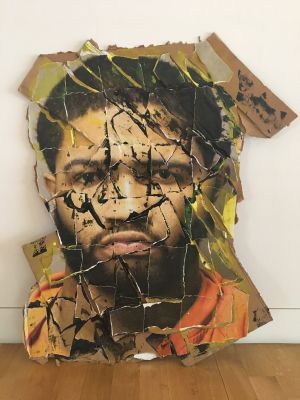 The Pennsylvania Academy of the Fine Arts (PAFA) is pleased to present Two Cents, Some Change, an exhibition featuring the work of seventeen current MFA students, curated by two recent PAFA Alumni, Sophie Brenneman and Emmitt Smith.  Two Cents, Some Change is on view from June 19 – July 10, 2018 in the School of Fine Arts Gallery in the Samuel M.V. Hamilton Building.

To put your two cents in is to offer your unsolicited opinion while simultaneously waiving accountability. By prefacing your statement with the two-cent disclaimer, you depreciate the opinion to follow, acknowledging its potential irrelevancy. Once your two-cent statement is verbalized, your audience can then deem your message as either worthy or unworthy of their attention.

Verbal two-cent statements move swiftly between speaker and listener, but what about when those opinions are manifested visually? Does the pace of the conversation change? Are those putting their two cents in given more time to convince their audience to stop, look, and contemplate the true value of the statement being offered?

The work of the artists in Two Cents, Some Change presents opinions not verbally, but visually. Their visual declarations emotionally and physically distance the artist from the viewer, and the viewer from the artist. This space creates room for dialogue and allows for an authorial separation that promotes investigation and healthy skepticism of the presented art objects. These artists recognize the over-saturation and commoditization of the art world, but remain inclined to make highly personal, technically rigorous, and carefully researched work. This is their two cents on subjects revealed and concealed through image, material, gesture, and presence.