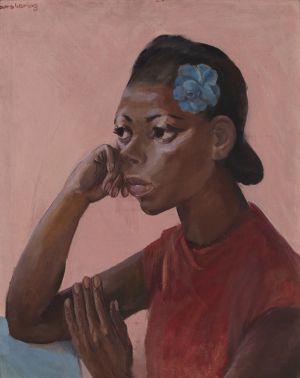 Though born into relative privilege compared to most African Americans in the late 19th century, Laura Wheeler Waring’s career as a noted portraitist was not without obstacles. The need to be self-supporting at a level consistent with family and societal expectations presented challenges to her artistic output and success that she would grapple with all of her life. Her story resonates as one who adeptly navigated race, class, gender, and workplace demands in the persistent pursuit of her calling.

This presentation shows Waring’s contributions to African American visual culture during the first half of the 20th century through her portraits of family members, students, and high-profile members of the black elite, and by her prolific work as an illustrator exploring the complex theme of how to represent the race.

About the speaker: Writer and media creator, Valerie Harris is the author of “Life of a Portrait: Laura Wheeler Waring’s Anna Washington Derry,” published in Pennsylvania Heritage, Summer 2019.

The fall's Art-at-Noon lectures are supported by the Behrend Family in memory of Rose Susan Hirschhorn Behrend, a former docent at the Academy and great supporter of its education programs.