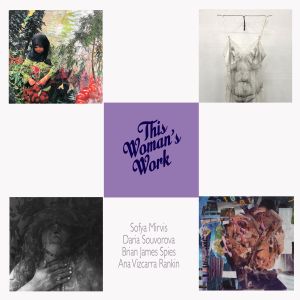 Join us for the reception of, This Woman's Work, an exploration of the representation and materiality of the feminine in our culture through the manipulation of mass produced materials and the performative and pastiche elements of post-modern discourse.

Exhibiting artists Ana Vizcarra Rankin, Daria Souvorova, Sofya Mirvis, and Brian James Spies explore what femininity is in our culture right now through mediums and methodologies rooted as much in traditional notions of “women’s work” as they are in dialogue with contemporary art and culture.

Uruguayan-American artist Ana Vizcarra Rankin has exhibited extensively in galleries and museums throughout the US. In 2015, she participated in the Barnes Artist Residency in Umbertide, Italy; in 2016 she was one of the Latin American artists juried into the first TrueQué Artist Residency in Ayampe, Ecuador. Vizcarra Rankin holds an MFA from the Pennsylvania Academy of the Fine Arts and a BA in art history from Temple University. Her work resides in international, public, corporate and private collections, including The Uruguay Cultural Foundation and the Brandywine River Museum of Art’s permanent collection. She lives and works in Philadelphia.

Daria Souvorova is a painter and designer. She received her Master of Fine Art from the Pennsylvania Academy of Fine Arts and a Bachelor degree in Fine Arts from Pratt Institute. Living and working in Baltimore, Souvorova works primarily in graphite and ink on altered fabric, and oil on linen with a focus on narrative figuration. Souvorova is the recipient of Maryland State Art Council's Individual Artist Grant and Perth Artist in Residence Grant and has been juried into residencies in Perth, Australia and Munson-Williams-Proctor Institute of Art. Souvorova has exhibited in New York, Maryland, and Australia and her work was included in numerous regional, national, and international exhibitions. Souvorova's work is included in several public collections including the permanent collection of the Munson-Williams-Proctor Museum of Art.

Sofya Mirvis is a mixed media collage artist residing in Philadelphia. Originally from Moscow, Russia, her work explores cultural phenomena through a feminine lens, incorporating a contemporary redefinition of folklore. Her work has been included in a multitude of private collections and has been widely exhibited including the Susquehanna Art Museum in Harrisburg, The Russian Cultural Center in Washington DC, and the Gormley Gallery at the Notre Dame of Maryland University, Baltimore, and private galleries across the US. She is the recipient of the Drawn at PAFA First Place Award, Awarded Best New Artist  at 532 Gallery NYC, and the Manayunk-Roxborough Art Center Juried Exhibition Award. She also plays an active role in Philadelphia's arts programming, working with several nonprofits aimed at delivering access to the arts to underserved populations. She is a graduate of the Pennsylvania Academy of the Fine Arts, MFA 2012.

Brian James Spies was born and lives in Williamsport, Pennsylvania. They have a Bachelor of Arts in Studio Art (Photo Concentration) from Lycoming College, a Post-Baccalaureate Certificate from The Maryland Institute College of Art and a Masters of Fine Art from The Pennsylvania Academy of the Fine Arts (2012). They work primarily in photography, and since 2018 when they came out as non-binary their work has focused on the performance and depiction of gender. Their work has been featured in exhibitions around the United States, most recently at The Power Plant Gallery at Duke University, Eastern State Penitentiary and KCAC in Kansas City, MO. They are represented by Wanderlife Gallery in Philadelphia.