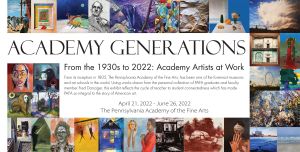 Please join us on Friday, June 3, 2022 from 4:00-7:00pm to celebrate the exhibition, Academy Generations.
Assembled by PAFA grad and Continuing Education faculty member, Fred Danziger, "Academy Generations" shows how the Pennsylvania Academy of the Fine Arts, since 1805, has nourished American art as one of the premier museums and art schools in the world.

This exhibit is not about a particular aesthetic or artist. It provides a limited, but authentic snapshot of teacher/student, classmate/classmate and alumni/institution connectedness from the late 1930s up to the work of current students. It begins with Julian Levi- who studied at PAFA with Arthur B. Carles and Henry McCarter. It continues with Fred’s other teachers such as Ben Kamihira, Louis Sloan, Joseph Amarotico, and Jimmy Leuders and progresses up to current students Athena Scott and Rebecca Giles, whose teachers include Elizabeth Osborne  and Dan Miller, who also taught Fred Danziger!  We see with this eclectic work, the “unbroken line” of artists working, teaching and supporting each other, all held together by their love of art and their common element of lineage: “The Pennsylvania Academy of the Fine Arts.”

Fred Danziger is a graduate of the Pennsylvania Academy of the Fine Arts (1970). He has had over 20 solo shows in Philadelphia (Rodger LaPelle, Gallery222, and FAN Galleries)  and Pittsburgh ( James Gallery), as well as numerous group shows in New York City at Sherry French and K.R. Perlow Galleries.

Fred received a major grant from the Tiffany Foundation, and 12 American museums, include his work in their permanent collections, including PAFA and the PMA. In 2016, The Southern Alleghenies Museum of Art mounted a major exhibit of over 60 of his paintings and in 2018, SAMA conferred on him their “Distinguished Artist Award”. Fred also won a Mid-Atlantic Emmy® in 2018 for his illustration work done for History Making Productions, a producer of historical documentary films, located in Philadelphia. In 2021 Fred was a semi-finalist in the Boochever Portrait competition of the National Gallery in Washington, D.C.

As an educator, Fred Danziger was on the faculty of The Pennsylvania Academy of the Fine Arts from 1997 – 2002 teaching portrait and still life painting classes. He also taught for 40 years at The Art Institute of Philadelphia. Starting in 2020, Fred began teaching online courses for the Continuing Education Department of PAFA. For a list of publications and collections, see www.FredDanziger.com