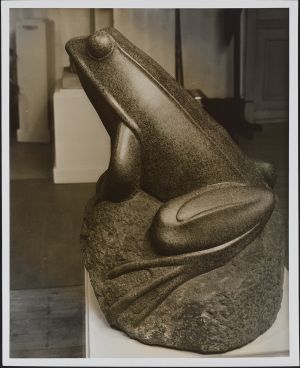 During the 1930s and 1940s, women sculptors flourished throughout the art world and were highly publicized in the American press. Cornelia Van Auken Chapin was one of several women who used the technique of direct carving, sculpting directly from life using hard stones. Best known for her animal sculptures that she carved in zoological gardens, Chapin’s story is a useful case study regarding the gendered discourses that surrounded mid-twentieth century women artists.

Today works by Chapin and her companion Marion Sanford can be seen on view at PAFA. Several blocks away from the museum is Chapin’s major granite sculpture, Giant Frog, located in Rittenhouse Square and owned by the city of Philadelphia. This talk will explore the reception history of Giant Frog and its relationship to Chapin’s professional identity.

Emily Ann Francisco is Curatorial Assistant, Modern and Contemporary Art at the National Gallery of Art and a PhD student in Art History at the University of Delaware.

The fall's Art-at-Noon lectures are supported by the Behrend Family in memory of Rose Susan Hirschhorn Behrend, a former docent at the Academy and great supporter of its education programs.