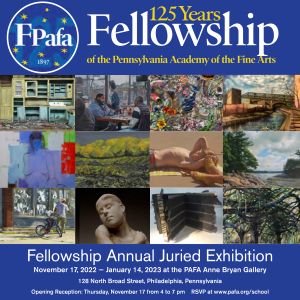 The Fellowship of the Pennsylvania Academy of the Fine Arts is one of the oldest Alumni art nonprofits in America.  It is staffed solely by volunteers, which speaks of the impressive loyalty and dedication of the Board and artists.  An independent entity, its purpose is to benefit the entire PAFA family, including students, faculty and staff in addition to Alumni.  Juried by the internationally acclaimed painter, sculptor, and a pioneer of photorealism, Audrey Flack, the 2022 Annual Fellowship Juried Exhibition features works of PAFA alumni.

Join us for the Opening Reception on November 17 from 4pm - 7pm in the Hamilton Building's Anne Bryan Gallery.  Registration information coming soon.

More about the Juror:

Ms. Flack enjoys the distinction of being the first Photorealist painter whose work was purchased by the Museum of Modern Art for its permanent collection. Among many major museums around the world, her work also resides in The Metropolitan Museum of Art, Solomon R. Guggenheim Museum, Whitney Museum of American Art, National Museum of Women in the Arts, Butler Institute of American Art, National Gallery of Australia, Pennsylvania Academy of the Fine Arts, and the Allen Memorial Art Museum. Additionally, she is the first woman artist, along with Mary Cassatt, to be included in Janson’s History of Art text.

Among her public commissions are Monumental Gateway to the City of Rock Hill in South Carolina, consisting of four twenty-foot high bronze figures on granite pedestals; Veritas et Justitia, a fifteen foot high figure of Justice for the Thirteenth Judicial Courthouse in Tampa, Florida; and Islandia, a nine-foot high bronze sculpture for the New York City Technical College in Brooklyn, New York. A major retrospective of her work organized by the J.B. Speed Art Museum in Louisville, Kentucky has traveled to museums around the country beginning in 1992.

Audrey Flack has taught and lectured extensively both nationally and internationally. She was awarded the Augustus St. Gaudens Medal from Cooper Union, was an honorary Albert Dorne Professor at Bridgeport University, and awarded an honorary professorship at George Washington University. There are numerous books on her work, including Breaking the Rules: Audrey Flack, a Retrospective, 1950-1990 by Thalia Gouma Peterson, published by the Abrams Publishing Company in New York. Audrey Flack is the author of three books, On Painting (Abrams 1986), The Daily Muse (Abrams 1989), and Art & Soul (Penguin USA 1991). She is currently in the process of writing a sequel to Art & Soul, as well as a memoir.