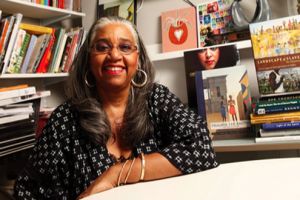 Due to the weather, this event has been rescheduled for March 15, 2019.

Dr. Leslie King-Hammond is an American artist, curator and art historian who is the Founding Director of the Center for Race and Culture at the Maryland Institute College of Art, where she is also Graduate Dean Emeritus.

King-Hammond received a BFA degree from the City University of New York (CUNY), Queens College, and a PhD in Art History from Johns Hopkins University. She is Chair of the Board of the Reginald F. Lewis Museum of Maryland African American History & Culture.

King-Hammond has curated several exhibitions, including the Global Africa Project, that was co-organized with Lowery Stokes Sims, the Charles Bronfman International Curator at New York City's Museum of Arts and Design. King-Hammond was awarded the Kress Fellowship in 1974, a competitive fellowship given to curators and historians at the beginning of their careers. While at the Maryland Institute College for Art, King-Hammond earned the Trustee Award for Excellence in Teaching in 1986. She received Mellon Grants for faculty research in 1988, 1989, and 2005. She was awarded a Lifetime Achievement Award from the Studio Museum in Harlem (NYC) in 2002; an artist grant from the National Endowment for the Arts in 2001, an Andy Warhol Foundation Curatorial Fellowship in 2008, and the Alain Locke International Prize in 2010.