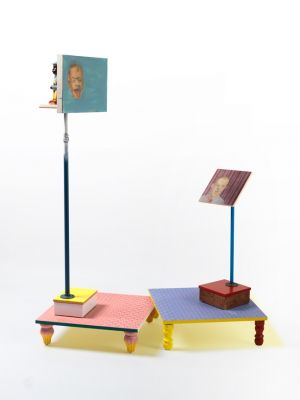 Steve Locke is a Boston-based artist, raised in Detroit, Michigan.

He received a BS in 1984 from Boston University, a BFA in 1997, and an MFA in 2001 from the Massachusetts College of Art and Design. He attended the Skowhegan School of Painting and Sculpture in 2002. He has received grants from The Pollock-Krasner Foundation, The Louis Comfort Tiffany Foundation, The Art Matters Foundation, and the LEF Foundation Contemporary Work Fund Grant.

His solo exhibition, there is no one left to blame, was curated by Helen Molesworth for the Institute of Contemporary Art, Boston. This show traveled to the Museum of Contemporary Art Detroit and was on view through July 2014, and coincided with the publication of the artist's first monograph by the same title. He is represented by Samsøñ in Boston.

He has had solo exhibitions with Mendes Wood in Sao Paulo, Brasil and a solo project at VOLTA 5 in Basel, Switzerland. He has been included in group shows in Boston, Los Angeles, New York, Philadelphia, Savannah, Seattle, Sao Paulo and Beijing. His work has been reviewed in Artforum, Art in America, Art New England, Juxtapoz, The Boston Globe, and The New Yorker. He writes the blog, artandeverythingafter.com, and is an Associate Professor at Massachusetts College of Art and Design.