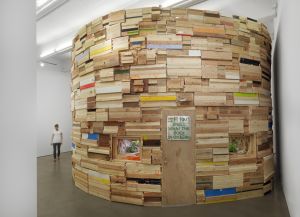 Phoebe Washburn received her MFA from the School of Visual Arts in New York and her BFA from Tulane University in New Orleans. Using a large range of materials and heaps of refuse, she creates sculptures and sprawling site specific structures that abound with inventiveness and intuitive logic. She has been shown in solo and group exhibitions in the United States and internationally including the 2008 Whitney Biennial. Her work is included in the collections of the Solomon R. Guggenheim Museum, the Whitney Museum of American Art, and the Hammer Museum. Phoebe is currently represented by Zach Feuer Gallery in New York.