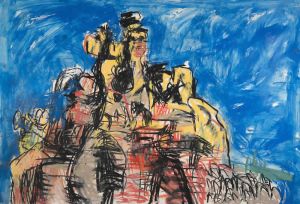 Pat Boyer’s work has been shown in solo exhibitions and group exhibitions throughout the United States and in Europe and is included in private collections around the world.

Born in Detroit, Michigan, Boyer earned her BFA and certificate from the College of Creative Studies in Detroit, and her MFA from PAFA. She paints and teaches privately in Norristown, Pennsylvania, where she keeps a studio among a close painting community.

Boyer received the Guiletta Award, Verona; as well as the Prix d’Assisi Award, Assisi. She was also awarded a visiting artist residency at the American Academy of Rome during a cumulative 12-year period, spending summers painting in Italy. She has also earned a Special Award at the River Juried Fine Arts Competition in Savannah, Georgia, and a Founders Award at the Woodmere Art Museum.

For more about the Visiting Artists Program, click here.