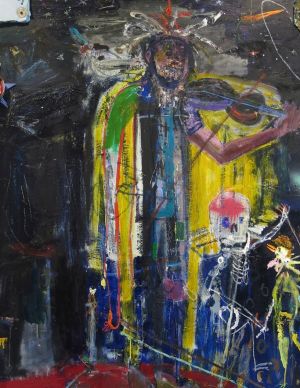 Matt Blackwell received his BFA from the Portland School of Art in Portland, Maine, participated in the Skowhegan School of Painting and Sculpture, and received his MFA from the University of North Carolina in Greensboro.

Blackwell is the recipient of a Guggenheim Fellowship (2015-2016) and a Purchase Award from the American Academy of Arts and Letters (2006). Residencies include Yaddo; Sculpture Space in Utica, New York; Vermont Studio Center; Triangle Arts Association; and Art Lot in Brooklyn.  Blackwell is represented by the Edward Thorp Gallery, New York, where he has had six solo shows including Southwest by Northeast in February 2016 and has been included in numerous group exhibitions.

In addition to a solo exhibition at Pierogi Gallery, Brooklyn, Blackwell’s work has been exhibited at Studio 10 and Parker’s Box in Brooklyn; John Davis Gallery in Hudson, New York; Hartwick College in Oneota, New York; Greenhut Gallery in Portland, Maine; Savannah College of Art and Design in Atlanta, Georgia; and numerous group shows in New York City and Maine.

For more about the Visiting Artists Program, click here.