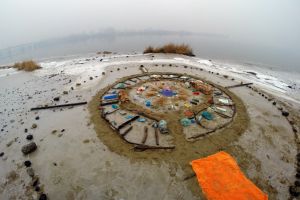 Marie Lorenz is an interdisciplinary artist who lives and works in Brooklyn. Since 2002, Lorenz has been designing and building boats that she uses to explore New York City waterways. Sometimes she takes passengers, and other times she explores alone with a video camera. She also collects objects found in the harbor and records them by printing, casting, or making videos. Lorenz has had numerous shows both nationally and internationally, including solo shows in Berlin and Vancouver. She has been the recipient of many awards such as the Rome Prize Fellowship. She is an assistant professor of painting and printmaking at Yale University and is represented by Jack Hanley gallery in New York.