Thomas Eakins and the World’s Fairs: Medical Art and the Gross Clinic 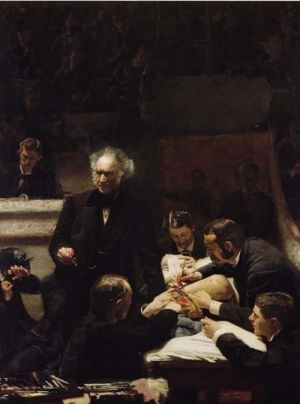 Thomas Eakins’ two medical masterpieces, The Gross Clinic, and The Agnew Clinic were both displayed at the 1893 World’s Columbian Exposition. This lecture series with Dr. Paul Sivitz examines Eakins’ use of a long-standing genre which he “modernized” (and the reason why The Gross Clinic was so off-putting to viewers at the 1876 World’s Fair). We will also explore if Eakins’ participation (essentially virtual, of course) in the Chicago World’s Fair contributed to the racial inequality promoted by the fair’s organizers.

In Class One Dr. Sivitz will look at Eakins masterpiece, the Gross Clinic. The piece was part of a tradition of medical painting and illustration dating back several hundred years. This lecture explores how Thomas Eakins not only continued in that tradition, but also expanded its possibilities.