Tales and Truths: Defining Artists of the Early Republic 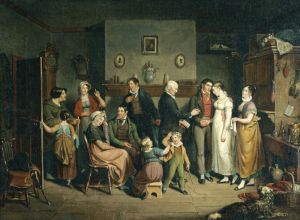 In the earliest years of the democratic experiment, many now iconic artists contributed to the creation of a national identity, and their work reflects early ideas about government, immigration, capitalism, technology and our relationship to natural resources that are still influencing the politics of the present. Each week, Monica Zimmerman, PAFA's Vice President of Public Education, Engagement, and Museum Operations, will dive deeply into the stories of five artists who had the privilege of shaping our earliest ideas of art and citizenship and consider how we find ourselves wrestling with both the dreams and the prejudices that they helped to enshrine.

West’s career set the stage for American artists to find international visibility, defining ideas about the new country’s values on religion, education and aesthetics. But West’s works also codified mythologies around the original inhabitants of these lands that laid the groundwork for centuries of racism and oppression.

Peale was a painter, scientist, soldier, tinkerer and politician. His long and varied career, from raising troops for the War of Independence to excavating the first mastodon skeleton for public audiences, illuminated early decisions about government policy, natural history, and civic engagement.

Krimmel’s paintings show the daily adventures of a burgeoning American citizenry, including weddings, holidays, and even election days. He was also the first artist to depict free slaves as part of American society, using distortions in physiognomies to identify his African American subjects.

Birch’s landscapes, including his much reproduced image of Philadelphia’s engineering marvel, the Water Works, ushered in Philadelphia’s reputation as a modern city and made it possible for Americans to imagine healthy, clean American cities.

Trained during the War of 1812, Morse’s paintings are often read as an allegory of debates around both religion and Federalism, informed by his outspoken anti-immigration beliefs. He also contributed to the invention of the telegraph and the game-changing technology that bears his name - Morse code.