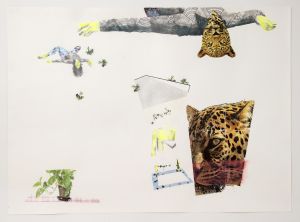 PAFA's Visiting Artists Program is a student-run program that brings a roster of local, national and international artists to campus for lectures, critiques, and workshops. The program exposes students and the public to a range of artistic approaches and fosters discussion about contemporary art and ideas.

Ruby Onyinyechi Amanze is a visual artist whose practice is primarily centered around drawing and works on paper. In a non-linear and open narrative, her drawings explore space as a malleable construct, the freedom to play as an of revolution, and cultural hybridity or 'post-colonial non-nationalism' as a mundane norm. Design, architecture, rollerskating and the movement language of Gaga are a few aspects of her current research and artistic practice.

Amanze has exhibited her work nationally and internationally including, New York, Johannesburg, Miami, Paris, London and Lagos. She is currently an Artist-in-Residence at the Queens Museum and also an Open Sessions 2015-2017 participant, at the Drawing Center, both in New York.