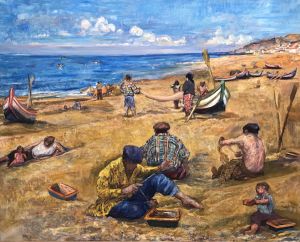 Join us for the Opening Reception of Philip Cohn: My Life's Work, an exhibition that looks back at the life and works of PAFA alum, Philip Cohn. This exhibition, curated and produced by Michael Gallagher, Associate Chair of Fine Arts, includes works that span Cohn’s 75 years as a professional artist.  Cohn and his family will be in attendance at the reception to help celebrate his impressive legacy.

Although Cohn’s works have been compared to those of well-known French and Italian artists such as Renoir, Cezanne, and Bellini—whose exhibitions Cohn first saw and admired while stationed in Europe during WWII—they are made profoundly personal in their clear depiction of Cohn’s own interpretations and perceptions of the people and places around him. Rather than aiming to mimetically imitate aspects of time and place, as attempted in certain types of portraiture and landscape drawing, Cohn emphasizes the process of narrative storytelling as a major element of his creative process. “Composition is the name of the game,” says Cohn, who enjoys embedding imagined social interactions into his works. Whether depicting Mount Vesuvius, the beaches in southern France, or everyday impressions of Manayunk, Cohn sees the subjects of his works as puzzle pieces that must perfectly fit together in one cohesive storyline.

Since his time in the Army, as well as his time traveling throughout Europe as sponsored by PAFA’s prestigious William Emlen Cresson Memorial Traveling Scholarship, Cohn has traveled extensively, sketching and painting the landscapes and interactions that have continued to color his own understanding of the world.

Inspired by the classic traditions, such as those espoused by Rembrandt and Constable, which he learned to appreciate while studying at the Barnes in the early 1950s, Cohn, now in his late 90s, continues to paint from his home studio. His works have been shown in galleries throughout the Philadelphia region. Cohn has dedicated the majority of his life to improving his skills and furthering his art career, and says that his creative process is not hindered by potential criticism from his audiences. Instead, Cohn’s career represents his creative journey as inspired by his world travels, both of which he has made his life’s purpose.