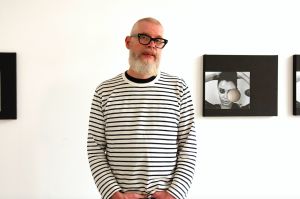 Peter Welz, lives and works in Berlin. He has been exhibiting in the most prestigious institutions and galleries worldwide, such as the Musée du Louvre and the Centre Pompidou.

Since the late 1990s, he has developed a kinetic approach to the human figure – through video installation he has been expressing the movement of bodies.

His work is characterized by multimedia choreographic installations that include sculpture, painting, video and dance. Since 2005 Welz has been working on the Portrait series, a study on five subjects: Francis Bacon, Casa Malaparte, Michelangelo Antonioni, AA Bronson & Douglas Gordon.