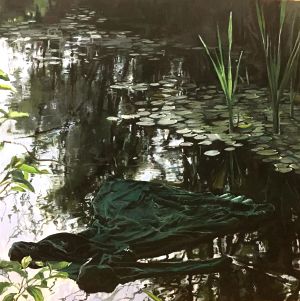 Jean Sbarra Jones received her MFA from Boston University and her BFA from the University of Massachusetts, Amherst. She has exhibited widely since 1993 and has received many honors and awards, including multiple residencies at the Vermont Studio School and the Nan Award (Boston University). Jean's paintings have been included in shows juried by well-known artists such as William Bailey, Judy Chicago, Faith Ringgold and Donald Sultan. Her work is included in many private collections, including the estate of the late Kenneth Noland, a well-known 1960’s color field painter. Her work is represented by Alpha Gallery in Boston, MA. Since 2009, Jones has taught at the Massachusetts College of Art & Design. Prior to that, she taught at the Art Institute of Boston (now part of Lesley University) and the New England School of Art & Design, among others.

Amid her recent work is a series of dresses floating in water. When asked about meaning, Jean said:
“The dress revealed itself as a metaphor, the worn and well- traveled dress represents renewal by light and water.”

Many have made observations about this body of work. A notable comment:
“Your dresses provoke so many ideas; freedom, resistance, the passage of time and loss. They look so organic in their settings, there is an element of surprise, but it is also like the water welcomes them in.”