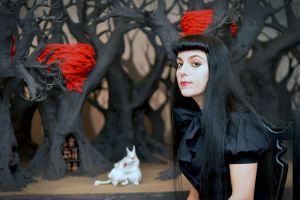 2019 Guggenheim Fellow Christiane Cegavske grew up among the dark firs and gnarly oaks of Oregon. The woodland environment left a permanent mark upon her creative work, in which her anthropomorphic creatures live out their dramas in natural settings. Cegavske’s work blurs the boundaries between fine art and animation and her gallery art supports and enhances her films, using dreamlike motifs in different mediums. Her finely crafted stop-motion animation is comparable only to a handful of creators in its expressiveness and artistic quality. Recurring themes make their way through Cegavske’s work in widely varied mediums, the expression shifting among her paintings, sculpture, film, quilts, or dolls. She is working on her second animated feature film, Seed in the Sand, which explores survival in the midst of ecological and emotional collapse through the adventures of furry creatures, a masked woman, dancing rag dolls, and a vicious sea monster. This masked woman also appears in her paintings and sculpture. In the film Cegavske plays this enigmatic figure wearing a painted life-mask of her own face. The rag dolls appear in Seed in the Sand dancing on an animated dream island and tormenting the masked woman, and feature prominently in her Cottonflesh Sacrifice installation as life-size sewn cotton versions at Cegavske’s exact height of five-foot-three and in many of her paintings and miniature sculptures. Red string winds its way into everything she does.

Her debut stop-motion feature, the award-winning Blood Tea and Red String (2006), is a dialogue-free film exploring love, greed, and loss among creatures who struggle to possess a doll they all desire. It received excellent reviews in The New York Times and New York Post, as well as Variety, where it was described as “a David Lynchean fever dream on Beatrix Potter terrain.” Her career as an animator and sculptor for television and film includes work on projects for The Oxygen Network, VH1, the Disney Channel and Fox at Space Bass Films and Acme Filmworks in Los Angeles, on a variety of projects with Bent Image Lab in Portland, Oregon, and on animated dream sequences for Asia Argento’s film, The Heart is Deceitful Above All Things. More recently, in 2018 she worked as CG and stop-motion animator, life cast puppet maker, and creative and technical consultant for Benjamin Capps’ award-winning film CIVET. She designed and fabricated the puppet heads for Space Bass Films’ stop-motion animated sequence produced for NBC’s A Very Pentatonix Christmas in 2017. Cegavske is currently working on her film and developing a body of paintings, sculpture, and art installations including film elements for upcoming shows.