Art of Antarctica in the Time of Climate Change 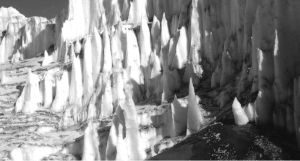 British literature has been a key cultural resource in the West for understanding the sublime in relation to nature and the Polar Regions. These texts will serve as the initial frame for investigating how women artists, in new and imaginative ways, often draw from and rethink those traditions to represent the effects of climate change in their art and writing.

This is class one in a three-part The New Aesthetics of Climate Change class
In each of the three talks in this series, writer and scholar Lisa E. Bloom brings art into conversation with the climate crisis. Connecting research from her forthcoming book Critical Polar Aesthetics: Art and the Climate Crisis in the Arctic and Antarctic with the strategies of science fiction, speculative fiction, epic, comedy and tragedy, this class considers how aesthetics and the imagination can be used to orient us toward a more just and resilient world. Over three weeks, Bloom will bring together issues too often kept separate from conversations about science and climate change - gender, sexuality, race, postcolonial relations, and even art history - and presents a compelling narrative about the interdependency of the human and the non-human, the resilience and resistance of indigenous communities, and the pervasiveness of resurgent nationalisms and globalizing capitalism.